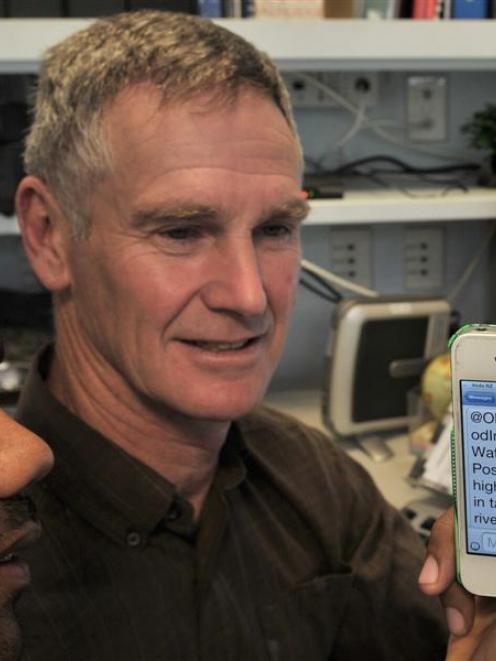 Otago Regional Council environmental data officer Nineva Vaitupu (left) and environmental monitoring team leader Peter Stevenson show the new Twitter alert the council will begin to use today for flood warnings alongside its autodial system. Photo by Jane Dawber.
Otago landowners along floodways will soon be alerted to the risk of flooding through the Twitter alerts service.

The Otago Regional Council, which at present attempts to phone 430 landowners on its flood alert list, is moving with the times and using Twitter alerts, a one-way messaging system.

Environmental engineering and natural hazards director Gavin Palmer said it would enable the council to improve the service it provided to the public when it came to advising predicted or actual flooding.

"It is in response to the way people now prefer to access information. Greater Wellington [regional council] and GNS also use Twitter alert services."

The alerts will be relayed from the council to all those who subscribe to the service.

There will be two types: "watches" that a high river or lake is possible within the next 36 hours, or "warnings" that high levels are likely or certain in those hours.

The alerts will encourage users to seek more information through the council's waterline or water information pages on its website.

An advantage is that instead of the council needing to maintain a list of contact numbers and people alerting the council to changes in phone numbers or personnel, it requires those interested to opt in to the service.

From today, the council will run the Twitter alert system alongside the auto dialler ring list until April, but that could be extended until several weather events have been experienced.

The service will only require the landowner to have a cellphone or computer as alerts can be sent out as an email.

An exception to the service will be the East Taieri Upper Pond area, which will still be phoned to be advised of the council's intentions to operate the Riverside spillway.

There are only a few areas, generally not flood prone, of Otago where cellphone reception is poor and the council expects that to improve.

"The auto-dial system will be maintained until we are satisfied it is fulfilling our service requirement and to allow time for farmers to acquire cellphones."

Staff experience is that the vast majority of farmers already carry cellphones.

In addition to the text service and maintaining the dial-up system, the council will continue to release prompt early warning flood advisories to give farmers time to move stock.

Chairman Stephen Woodhead said once he understood it was essentially a "pager system", he believed it was a positive move, especially as farm ownership and management changed regularly making it impossible to maintain an accurate call list.

The call list was inefficient and took staff hours to ring around, he said.

The council will publicise the changes and will phone all of those on the list to tell them about the change.