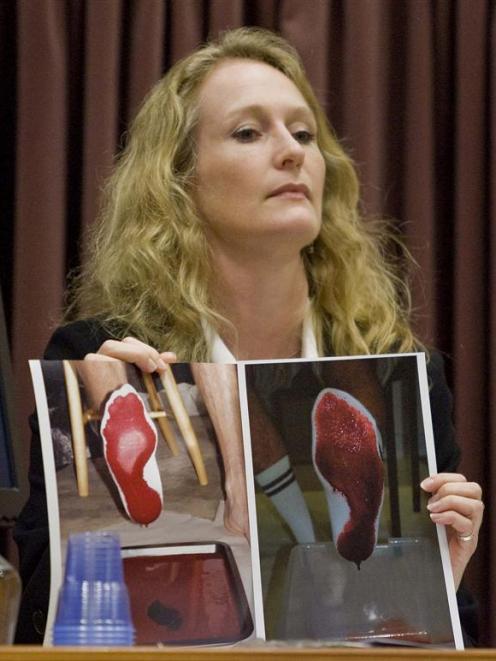 Forensic scientist Dr Anna Sandiford displays photos of bloodied feet at the Bain retrial yesterday.
David Bain's foot was too big to have made the bloody sock-prints found in the Bain family home on the morning five of the family were shot, the Bain retrial was told yesterday.

Auckland consultant forensic scientist Anna Sandiford was called by the defence on the 48th day of David Bain's retrial on five charges of murder.

Bain (37) denies killing his parents, Margaret and Robin, two sisters and younger brother at their Every St house on June 20, 1994.

Dr Sandiford told Justice Graham Panckhurst and the jury she used the accused in tests similar to those carried out by ESR forensic scientist Kevan Walsh to establish what size print a 300mm foot would leave on carpet.

Prints made by a bloodied sock were found in Margaret Bain's bedroom, in the hallway of the house and in the doorway of 18-year-old Laniet Bain's bedroom by former ESR scientist Peter Hentschel.

He used luminol, a sensitive chemical which reacts to minute amounts of blood. A complete print revealed by the luminol was measured at 280mm. Mr Hentschel believed the foot which left the print would have been larger than the 280mm print.

But Dr Sandiford said that was not logical, that the foot was flexible, designed to bend, and did not leave a smaller impression.

Her test results showed the opposite to Mr Hentschel's opinion, as did those carried out by Mr Walsh, namely the marks left in luminol were larger than the foot that deposited them.

Based on her tests, Bain's right foot could not have made the bloody prints.

Robin Bain's feet were measured at 270mm and the defence contention is that Robin left the bloody sock-prints, from blood being soaked up while the killer was in Stephen Bain's blood-spattered room.

Dr Sandiford said that in a test, David Bain dipped his sock-clad foot in a tray of cow's blood, then walked on carpet. She sprayed the area with luminol and photographed and measured the resulting prints.

Her tests showed Bain's 300mm foot left a 306mm mark, with the prints ranging up to 315mm and the smallest mark never being less than the actual foot length.

She also agreed that by removing a 10mm strip from the toe and heel area of her prints, but still showing most of the heel and toes, the print size was brought down to 280mm. The heel and toe definition were still visible, but a "good part" of the second toe was missing.

Dr Sandiford said she agreed Mr Hentschel had talked about measuring the area of strongest luminescence and of there possibly being fainter luminescence beyond the strongest areas.

Retired technical and scientific photographer Peter Durrant said he took part in a 1997 review of the Bain case by the police and the Police Complaints Authority. He said the photographic and video material provided to him by the police was "an absolute shambles".

He had analysed photographs and other material said to show a spectacle lens in an area of Stephen's room near an ice skate and concluded it was "definitely not a lens", but an effect of the light which former detective sergeant Milton Weir had mistakenly identified at Bain's first trial as a spectacle lens.

When he compared the photograph of the supposed lens with a photograph of a glass lens found in the same area after the removal of Stephen's body, Mr Durrant said it was clear that what was seen in the first photograph was an effect of the light.

"My opinion is that he's mistaken. He's wrong."

But he accepted Mr Schollum's evidence about the sequence of photographs taken of Stephen's room, although there was no way of knowing when the photographs were taken. However, he did not agree a gap between some items - the gap showing black in some pictures and white in others - appeared randomly.

Mr Durrant also said photographs of a jacket in the area where the lens was found showed there had been "movement" of the jacket.

Cross-examined by Robin Bates for the Crown, the witness denied he produced a book of photographs which were not in the correct order to suggest there had been some "planting" or tampering with the scene by Mr Weir. It was just an observation and it was not up to him to conclude, Mr Durrant said.

He had not been in court when the allegations were made to Mr Weir, based on the booklet and he had no comment to make to Mr Bates' proposition that the photographs could no longer be used to support the allegation.

To a suggestion the photographs he had used to establish movement of the jacket were not in sequence, the witness said as far as he was concerned, they were. But, comparing them with the video images, he agreed they were not in order.

"I suggest the same goes for numerous other photos you've taken and put in a booklet suggesting some sort of order because you haven't sat down and done any sequencing," Mr Bates said.

Mr Durrant said the photographs suggested to him that things had been moved then photographed again, indicating the crime scene had been contaminated.

"It's more a concern you've presented photographs out of order when an allegation has been made," Mr Bates told the witness.