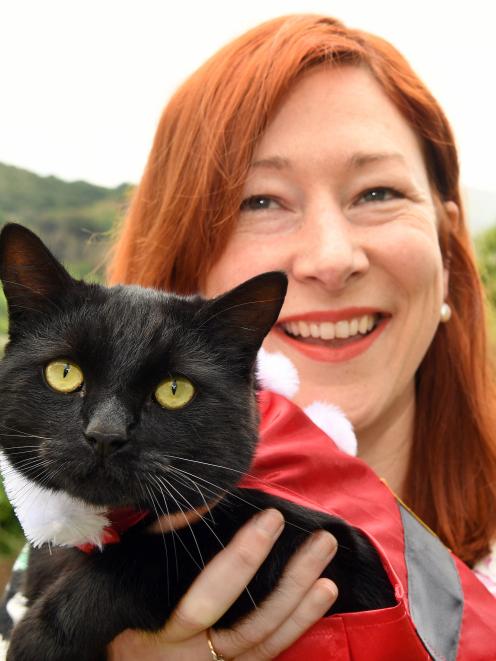 Kathryn van Beek, of Port Chalmers, holds her cat Bruce, whose blog is followed by thousands of people around the world each day. Photo: Stephen Jaquiery.
A one-day-old kitten found soaking and abandoned on the streets of Auckland has blossomed into New Zealand’s most famous tom.

Port Chalmers resident Kathryn van Beek discovered Bruce (named after Bruce Wayne, a.k.a. Batman, who was also orphaned)  while on her way home from work in Kingsland in Auckland last November.

"I was working for Auckland Council at the time and they were really interested, so I started a Facebook page to keep everyone updated."

Updates of Bruce’s numerous visits to the emergency vet and struggle to survive at such a young age without his  mother quickly gained a  substantial and dedicated audience, she said.

His Facebook page, which was updated daily, now had over 23,000 followers and a blog that was created just after the Facebook page had been voted the 89th top cat blog of 2016.

"At first it was a real life-and-death battle and then I thought interest might fade, but then he started turning black from grey, so that interested people."

It was believed his chameleon-like coat change was due to fever coat, a condition caused in pregnancy when the mother cat is sick or stressed.

Since moving to Port Chalmers in February, Bruce’s adventures had taken a casual turn but his following had not waned.

"He helps out a lot in the garden and he has been really embracing the Christmas spirit with his Santa suit."

His fans, who were "predominantly middle-aged women", lived all over the world, including the United States, Germany, the United Kingdom, Mexico, Spain, Thailand, India, Japan and Israel.

Since "escaping the rat race" of Auckland,

he had been contacted by some Auckland-based fans who were thinking about moving to Dunedin.

"He has had all of his first cat milestones here — he loves Dunedin."

Ms van Beek said she was the first to admit the idea of documenting the daily routine of her cat for the world was "a bit strange".

"But I think he is a ray of hope for people. People like to see a cat coming up in their Facebook feed doing some gardening."

Next year, she planned to self-publish The Kitten Without a Name —  a fictional children’s book based on Bruce’s Dunedin adventures.

This story will have ruined Gareth Morgan's Christmas.