Fourth WW1 exhibition on at museum

Toitu Otago Settlers Museum exhibition developer William McKee displays the granite slab engraved with names of men from the Otago Peninsula who died in World War 1. It was previously part of the Soldiers' Memorial, on the peninsula. PHOTOS: PETER MCINTOSH
Letters written on a portable typewriter brought scores of Dunedin families the devastating news that their soldier loved ones had died in 1918, the final year of World War 1.

A portable typewriter, once owned by Rev Edmund Tipler, a Dunedin Presbyterian minister who served as chaplain to the 1st 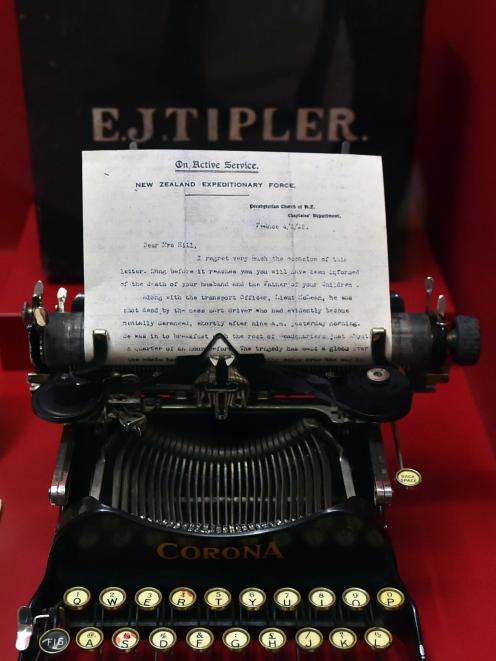 This typewriter was used to send word home to the families of fallen soldiers.
Otago Battalion in France, is displayed in the Toitu Otago Settlers Museum's latest World War 1 exhibition.

A letter facsimile contains words of comfort offered by another Presbyterian chaplain with the Otagos, the Rev David Herron.

Titled ``1918: the final year of conflict'', the exhibition has opened at the museum's Call to Arms Gallery.

It is the fourth and last of a series of WW1 commemorative exhibitions staged at the gallery to mark the respective annual 100-year anniversaries linked to WW1.

Exhibition developer William McKee said that, in contrast with 1918, many earlier WW1 battles and campaigns, including Gallipoli in 1915, had gained more attention from the public.

``It was a forgotten year, but it was devastating.''

More than 500 Dunedin servicemen died in 1918, the second-highest annual total of the war, whereas about 270 Dunedin people had died at Gallipoli.

The later ``100 Days Campaign'' was an Allied victory, but came at a ``terrible cost for Dunedin'', he said.