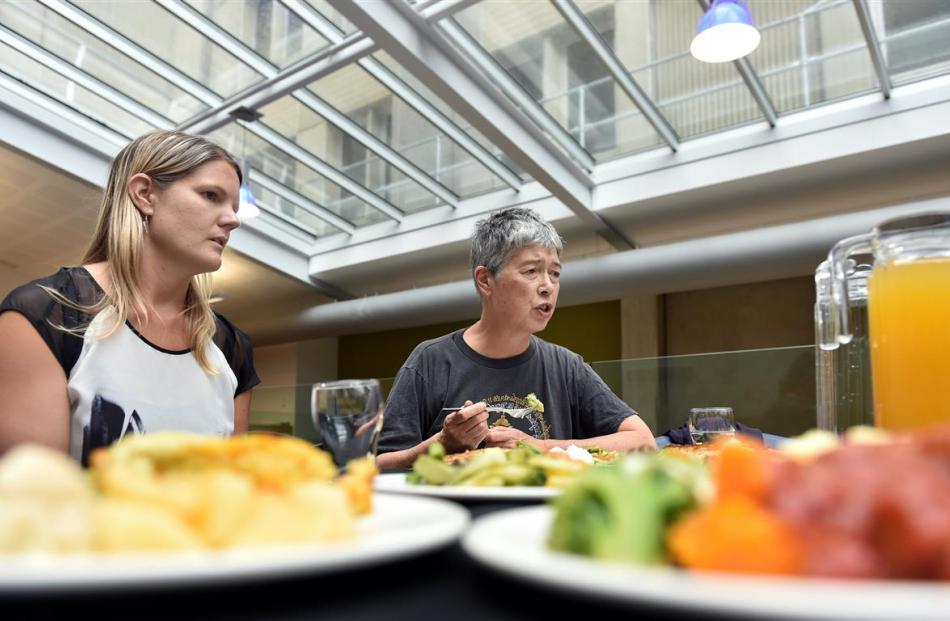 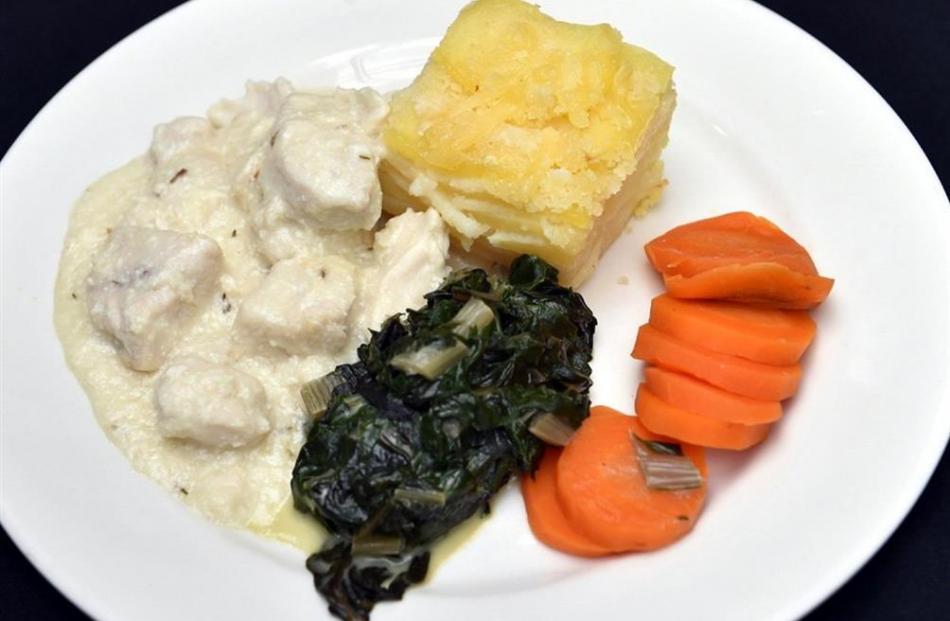 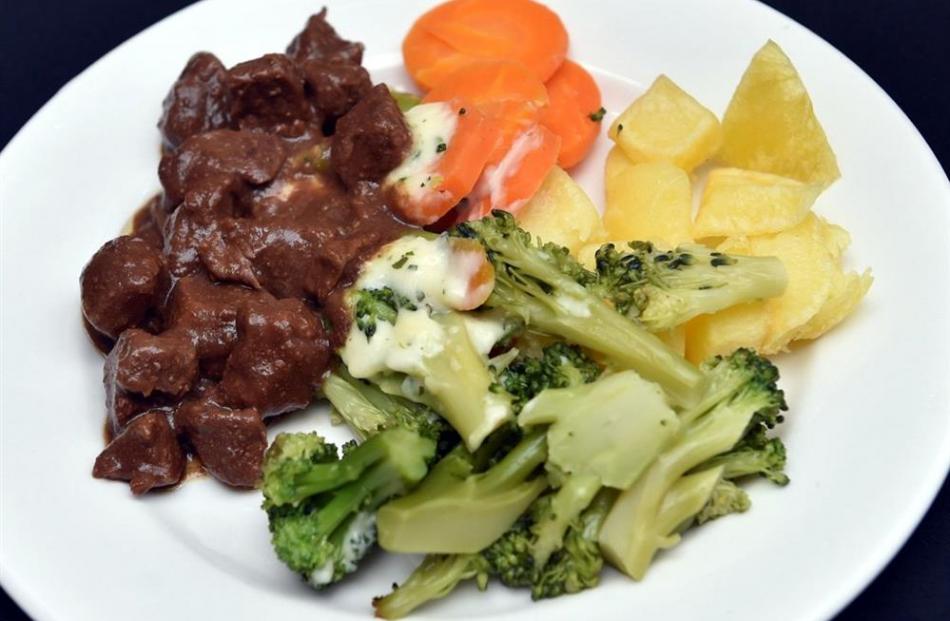 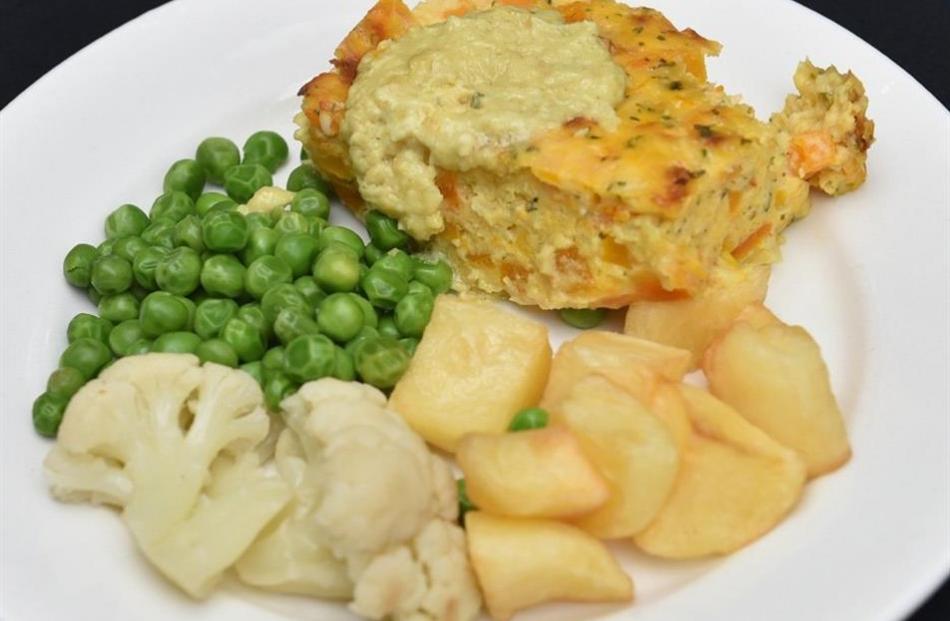 Pumpkin and cheese gratin with potatoes, cauliflower and peas. 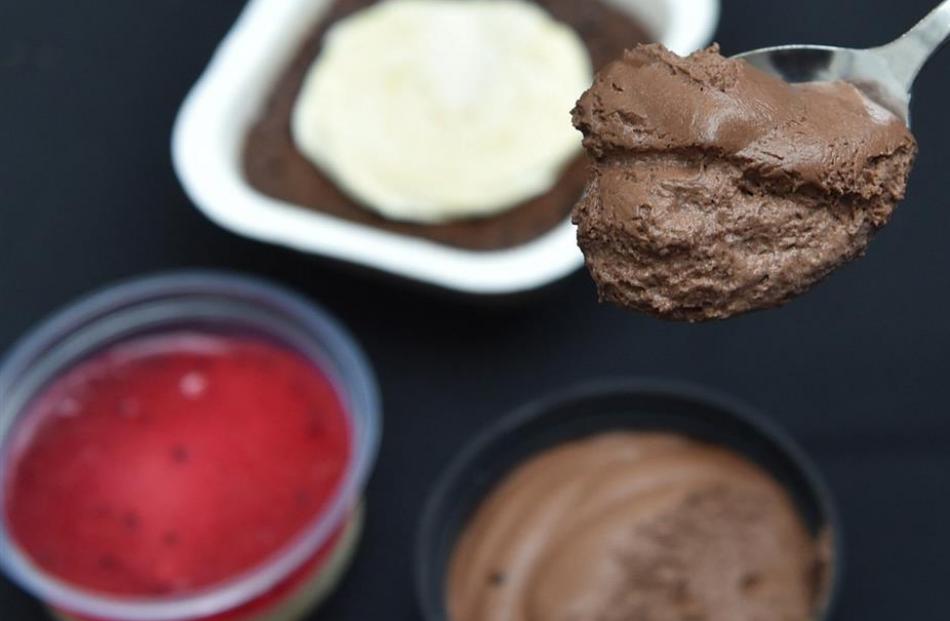 Veteran food writer Charmian Smith agreed to taste-test the meals that have prompted dozens of meals on wheels cancellations. Health reporter Eileen Goodwin was on hand to gauge her response.

"I hope I don't ever have to rely on that sort of food when I get really old.''

That is the verdict of award-winning Dunedin food writer Charmian Smith after taste-testing the reheated frozen meals at a session convened by the Compass Group at Dunedin Hospital this week.

She was particularly critical of the potatoes, served in a variety of guises: mashed, roasted and au gratin.

The potatoes, in particular the au gratin, were "under review'' because of "seasonality'' issues, Compass representatives assured Ms Smith.

Some dishes were better than others.

Ms Smith had not expected such variation in quality.

One helping of carrots had a "strange rubbery texture'', while carrots on another dish were "OK''.

None of the potatoes impressed, and in one case they were "tough and stale''.

"I think the problem with the vegetables and the lasagne is that they don't really survive the treatment of being frozen then reheated in an oven.''

Scrutinising an ingredient list, Ms Smith peppered company representatives with questions about how the food was sourced, prepared, cooked and stored.

The ingredient list was an internal document that could not be taken away from the session.

A seemingly high level of preservatives was concerning, although she acknowledged they were probably necessary in order to store the meals.

"Why are sulphites in almost everything?'' Ms Smith asked the representatives.

The vegetarian quiche had a "tough outer layer''.

"Some of the meat textures were quite nice. The Moroccan lamb had a nice aroma.''

The appearance of the food was reasonably good, Ms Smith said.

Compass sources the main meals from provider LSG Sky Chefs, in Auckland, for the Southern District Health Board.

They are reheated in Dunedin and Invercargill for meals on wheels recipients.

Deemed too sweet, the cheesecake was "appalling'' and "gluggy'', Ms Smith said.

But the mousse was "nice''.

She was concerned that to meet minimum mandatory standards meals needed to provide only a third of a person's nutrition needs.

"They are expected to find two-thirds of the nutrients themselves but may well resort to bread and biscuits and other easy things to eat.''

A company spokeswoman later responded to Ms Smith's concerns over sulphites in a statement to the newspaper, saying they were added to food to preserve its appearance and quality.

Ms Smith retired from the Otago Daily Times last year after 23 years as a feature writer.

She was the newspaper's food editor and wine columnist, and her work has featured in other publications.

• "Some of the meat textures were quite nice. The Moroccan lamb had a nice aroma.''

• The cheesecake was "appalling'' and "gluggy'' but the mousse was "nice''.

• One helping of carrots had a "strange rubbery texture'', while carrots on another dish were "OK''.