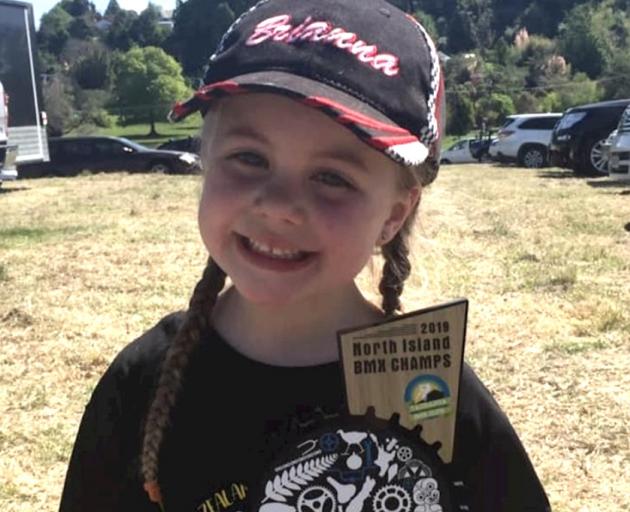 Brianna Steedman. PHOTO: SUPPLIED
The Dunedin BMX Club is hosting an event to raise money for a young rider with cancer.

Six-year-old Brianna Steedman, of Dunedin, was diagnosed last month with Wilms tumour, a type of childhood cancer which starts in the kidneys.

She was quickly flown to Christchurch for treatment and has started chemotherapy.

Her parents, Julia and Darrin, are by her side and therefore unable to work. Brianna’s mother is also pregnant with the couple’s fourth child, which is due this month.

Brianna and her brothers competed in events and her parents helped behind the scenes.

‘‘It’s been a bit of a shock, especially someone so young,’’ he said. Club members and the wider BMX community wanted to help ease the financial burden on the family so organised a fundraising event for March 28.

There will be two classes on offer —one for BMX riders and a fun, novelty race for people who want to give it a go.

All money raised will go to the family. There had been a good response from other clubs, including Kaitangata, Invercargill, Alexandra and Cromwell.

Members of the Invercargill club had put together a gift pack for Brianna.

‘‘The kids contributed to it, like colouring books and bits and pieces,’’ Mr Wadsworth said.

A T-shirt in Brianna’s favourite colour, pink, had been made for people to buy and wear.

‘‘The BMX community is very family­orientated. ‘‘So I think when something like this happens . . . everyone sort of rallies in and gets behind it.’’

★ Friends of the family started an online Givealittle page.

To give to ‘‘Brianna Steedman’s cancer battle’’ on Givealittle click here.