Gateway to front show in China 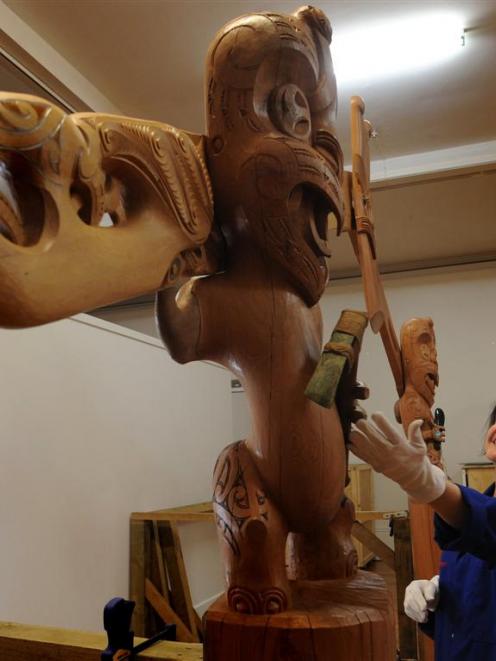 Otago Museum exhibitions, development and planning director Clare Wilson takes a look at a new Maori gateway which will be displayed in China next month. Photo by Peter McIntosh.
A carved gateway commissioned by the Otago Museum will become the focal point of a major display of Maori artefacts in Dunedin's Chinese sister city, Shanghai, next month.

The Otago Museum recently took delivery of the waharoa (gateway), which will be one of about 350 Maori exhibits which will open to the public as "Te Ao Maori: Maori Treasures from the Otago Museum" at the Shanghai Museum on July 21.

This will be the first exhibition of Maori taonga (treasures) at a museum in China and by far the biggest overseas exhibition organised by the Otago Museum.

Shanghai Museum is regarded as one of the world's great museums, attracting about two million visitors a year. Up to 500,000 visitors are expected to attend the exhibition.

The gateway, which is 3m tall and 4.5m wide, was commissioned for the museum's permanent collection, and has been created by James York, a leading Ngai Tahu craftsman who lives at Hokitika.

Matapura Ellison, who chairs the museum's Maori advisory committee, said the waharoa was an "inspirational" taonga which was "a wonderful addition to the museum's collection for us all to enjoy".

Otago Museum exhibitions, development and planning director Clare Wilson said the work, carved from totara and kauri, and including several pounamu (greenstone) elements, would make a "high impact entrance" to the Chinese exhibition, setting the scene for "an engaging and uplifting visitor experience".

Dunedin Mayor Dave Cull said it was an "outstanding" achievement for the Otago Museum to be presenting the first Maori exhibition at a museum in China.

He noted the Otago Museum had worked in partnership with its Maori advisory committee and the artist to commission the gateway, and gained the blessing of Ngai Tahu in developing the overall show.