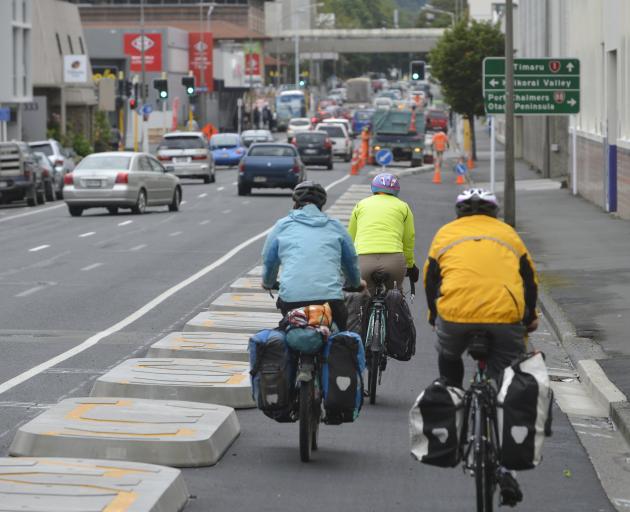 The concrete separators are in place, the road cones are mostly gone, and the months of traffic delays are pretty much done.

The project has elicited plenty of venom on social media, as its construction has clogged traffic trying to get from one end of the city to the other.

But with the build almost done and the cycle lanes ready for use, the Otago Daily Times decided it was time to venture out and see how the project stacked up from a cyclist's point of view.

We cycled with Mr Underwood from Queens Gardens to the Botanic Garden and back on a busy Thursday afternoon.

Compared with the hazardous negotiation of the one-way in times gone by, the trip can only be described as much better, and much safer.

The concrete separators provide a distance from vehicles that provides much needed peace of mind.

Of course the dangers are not completely gone; an elderly couple leaving a parking area off Cumberland St were completely oblivious to the brightly coloured cyclists heading their way as they crossed the cycle lane.

But that behaviour did not continue on the ride. Other motorists were aware of cyclists, and happy to give way when necessary.

The new phasing of lights was also a boon.

Cyclists now get a chance to cross intersections for a short time before turning cars, and again at the end of the phase, making the trip much smoother.

While there was still a need to keep a close eye on traffic when approaching intersections, particularly where cars and bicycles merged at right turns, the experience was overwhelmingly positive.

Mr Underwood said there was still work to do.

That included introducing a Barnes Dance pedestrian crossing on the intersection of Albany and Cumberland Sts.

Cyclists riding south in the cycle lane at the moment have to stop at the crossing outside the University of Otago central library and cross from the left side of the road to the right.

A Barnes Dance meant cyclists would be able to move diagonally across the intersection.

As well, there was ''still a lot of finishing work to do.''

Concrete separators needed to be fixed in place, and some that were out of position needed to be ''tidied up''.

Some had to be shifted at access points to make it easier for vehicles to get in and out of driveways.

More green paint had to be added, and intersections would be monitored to make sure traffic light phasing worked.

However, the cycle lane was functionally complete.

''It exists right throughout the one-ways from Queens Gardens to Pine Hill as we have planned for.''

Finishing work would continue in January and February, and the Barnes Dance work on Albany St was likely to be done in March.

Mr Underwood said he had used the cycle lanes ''many, many times''.

However, people still needed to ''maintain an awareness''.

However, the cycle lane was ''achieving its job''.

''You do feel very separate.

Mr Underwood said he saw students using the cycles lane without having to worry about traffic, which was ''cool''.

Co-housing project a light for NZ

Like a lot of new things, it takes time for people to settle into the bike lane project. The ones who do use it, which is a very small percentage of the population by observation alone, will no doubt feel protected from other vehicles. It is still the massive disruption, unneeded expense and removal of car parks it was predicted to cause. So no I am not happy with it.

Great start, they should have been here a long time ago so road users would have been more accepting. The safer cyclists feel, the more people will feel cycling is a great alternative and that will in the end be an enormous relief on polluting car use.
Acceptance will come. Let us hope many more safe bike lanes will follow. You can't stop the future and the resistance will slowly disappear.

Please don't fall off your cycles or electric bikes and electric scooters onto those ugly concrete separators unless your bones are strong cause you are sure to come away with broken hips ribs and collarbones.
Rubberising the sharp corners could soften the fall somewhat.

Other wise this is very much safer being mostly on the other side of the road with know longer vehicles turning left on top of cyclists intending to go straight ahead.
Well done Simon Underwood.