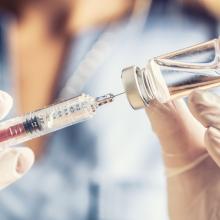 Photo: Getty Images
Southern GPs are champing at the bit to get involved in the Covid-19 vaccination programme and are frustrated they have not yet been asked to play a role.

Three-quarters of those who answered said that general practices should have a role to play, and 33% said they wanted to vaccinate their own patients, followed by other patients.

"Their teams have the knowledge, skills, and staff to deliver the programme and, while they really appreciate the information they’re receiving, they’d like certainty and clarity — a better idea of the overall plan for this region.”

The Southern District Health Board is co-ordinating the Otago and Southland rollout on behalf of the Ministry of Health.

Port workers, their household contacts, and frontline health personnel have started receiving the vaccine at clinics in Dunedin and Invercargill, and two new clinics are opening soon in Queenstown.

Vaccine programme incident controller Hamish Brown told the SDHB on Thursday that primary care would play a greater role later as the vaccine began to be offered to the general public.

"It is essential that the DHB and PHO remain joined up and effort is put into building an independent workforce and not reducing the capacity in primary care, aged residential care, and other parts of the sector."

Cromwell GP Greg White said dissatisfaction with the vaccination rollout had been building among doctors for months, and they were disappointed by how things were unfolding.

"The Ministry of Health and DHBs are trying to reinvent the wheel, duplicating staff and vaccinators, in separate clinics, using a new untried [and currently nonexistent] software system, with no provision for providing such facilities and equipment in our rural area.

"This is almost criminal with 300,000 doses sitting in freezers in Auckland, while we continue risking further lockdowns."

Most general practices administered thousands of vaccinations a year and would be ready to go almost immediately if asked to join the effort to vaccinate against Covid-19, Dr White said.

"There seems too much concern about wasting vaccine, and perhaps trying to wangle a cheaper rollout, by controlling costs at their ‘own’ clinics.

"We in GP clinics hold thousands of dollars of vaccine stock in storage and must account for it, vaccination is part of our daily life, and semi-trained, semi-retired vaccinators, are not similarly au fait."

The Covid-19 vaccine was "simply another vaccine to us, with some minor logistical differences," such as cold storage transport requirements, Dr White said.

So... one Cromwell GP is frustrated with the planning process and the rest are eagerly looking forward to involving themselves in the vaccination programme. Despite the gloom suggested in the headline this is good news.

Pretty sure the latest clinics starting up in Queenstown and Fiordland are in.... GP practices....