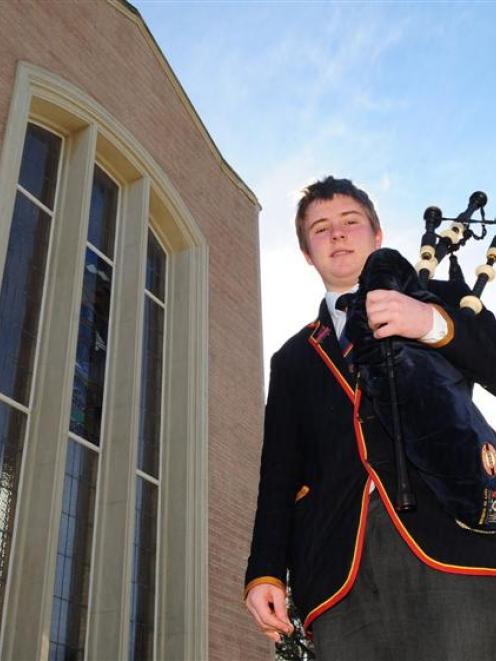 Since 1932, the school has had their own pipe band and trained a long line of prominent pipers.

In more recent times, that has included one of the region's piping greats, Martin Frewen, who won several national titles and has played in some of the world's best pipe bands in Scotland.

But none of them has reached A-grade status during their time at John McGlashan College.

Liam is one of the youngest in New Zealand to make the grade and, of the 1000 pipers nationwide, he joins the elite club of about 50.

The 18-year-old vividly recalls his first encounters with pipe bands.

As a young boy, it was only natural he would be standing on the kerb of George St with his "very Scottish" mum every time a pipe band went on parade.

"I remember seeing pipe bands marching down the street and being quite excited by it. There's just something about the music . . . I think it's in the blood."

By age 11, Liam had started learning bagpipes and it was not long before success came his way.

In the past four years, he has won various South Island and North Island regional solo championships, and last year he was runner-up in the Under-21 New Zealand Solo Piping Championship.

Liam is a member of the City of Dunedin Pipe Band, which won the Grade 2 New Zealand Pipe Band Championships this year, and has been a major influence on the success of the John McGlashan College Pipe Band.

Despite the successes, he said becoming an A-grade solo piper at such a young age was a highlight of his musical career.

To reach the milestone, he had to win two major solo championships.

"It's hard to do. You've got to play consistently well. It takes one to two hours a day to get to the level where you could win these competitions."

Overcoming the hurdles is one thing.

But now Liam is finding his success is presenting a whole new set of challenges - mainly that of going from learner to role model.

"There's responsibility to keep playing well and show that I'm worthy. There are major expectations for me to play well and deliver at contest time, and younger players will look up to me."

For Liam, the fight goes on to be even better.

Although A-grade status was as high as pipers could go, he said the stretch between the top and bottom of the grade was large.

There are only four other A-grade solo pipers in Dunedin at the moment and the range of ability between them varies.

"I've still got a way to go before I get to the top of the A-grade. That could be years away yet."

Next year, Liam said he hoped to juggle a law degree at the University of Otago with piping competitions at home and abroad.

"It's onwards and upwards from here. I want to play in some Scottish competitions and see how I stack up against some of the world's best pipers. It will be very educational."