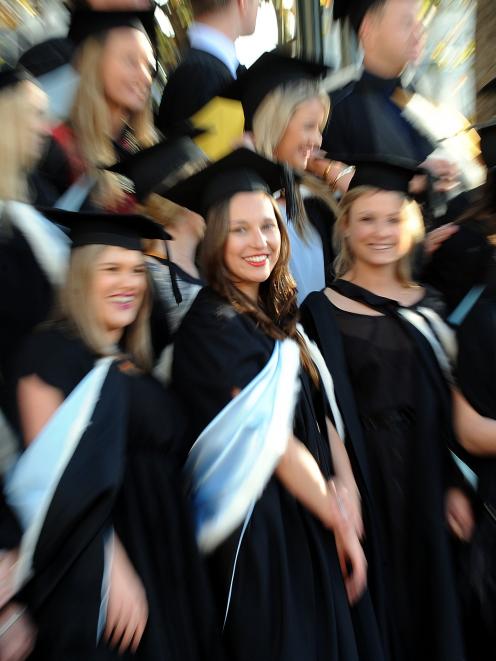 Georgie Austin-Ellas (23, centre) was one of the hundreds of University of Otago graduands to march through the centre of Dunedin during the graduation parade on Saturday. Photos by Peter McIntosh.
For the first time in history, the human race has the technology and resources to end "the worst of global poverty" but the political will is lacking, University of Otago professor Andrew Bradstock has warned.

Addressing about 255 humanities graduands at a graduation ceremony at the Regent Theatre, Dunedin, on Saturday, Prof Bradstock urged them to use what they had learned not only to serve themselves.

Graduates should also serve a "higher purpose", and what one commentator had called "the groaning needs of the world". 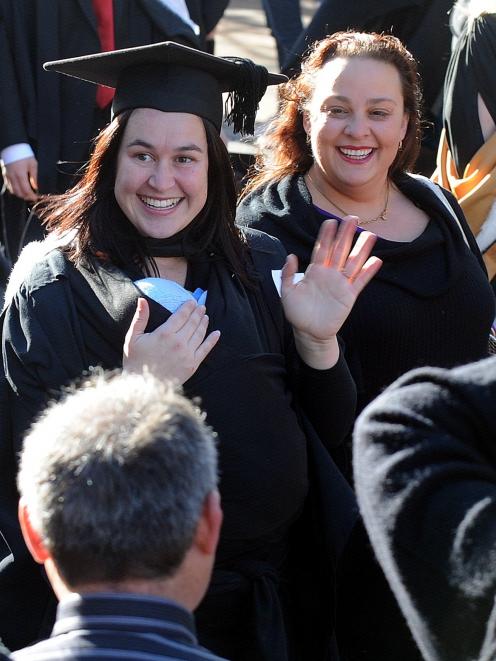 Raquel Buckley (29, left) holds her 4-week-old baby Noah Buckley as she takes part in the graduation parade with her friend Nikki Sparrow.
Prof Bradstock, who directs the Otago Centre for Theology and Public Issues, said the world faced "the very real and impending threat of global warming and rising sea levels".

And he urged graduates to "think about how you can most effectively be an agent for positive change".

"As we reflect that we still allow thousands of children to die every day from preventable diseases, and lack of food and water, think how you can leave the world a better place than you found it.

"For the first time in history we have the knowledge, technology and resources to bring the worst of global poverty virtually to an end.

"What we don't have is the political will to do so.

"We have the capability, as a global community, to reduce our carbon emissions and slow the rate of global warming."

The political will was, again, lacking but change could be made "if you have the moral energy needed to create that political will".

Political change could come by "small practical steps" as well as by campaigning.

In Dunedin, New Zealand's first Fair Trade city, several events had recently been held to highlight the difference that buying fairly-traded goods could make to farmers and producers in developing-world countries.

If everyone attending the graduation ceremony decided to make their next purchase of coffee or chocolate or bananas from "fair trade" sources, that would make the world "a little more than it currently is", joining millions worldwide who were gradually "changing the rules of global trade".

He urged graduates prepare to make constructive changes themselves and not to "bemoan the inaction and cynicism of those we might have expected to lead".

"As the saying goes, we are the ones we have been waiting for."