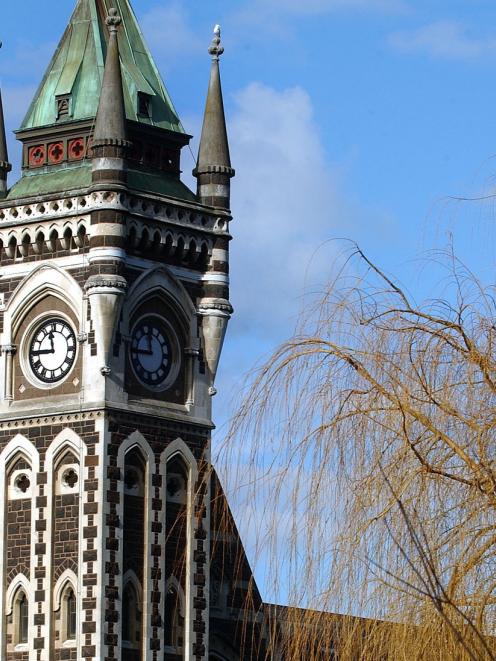 Our universities have a legal and moral duty to act as a critic and conscience for society; examining, thinking about and commenting upon the real world things happening in our communities. Photo by Peter McIntosh.
We need farsighted university councils, not myopic ones, writes Lesley Francey, the national president of the Tertiary Education Union.

The Tertiary Education Minister wants to cut away the independent voices on university councils. This is not an esoteric debate about good governance, though; it is a very real debate about New Zealanders' democracy and freedom to speak up.

Universities take great pride in their independence from government, and often with good reason.

Few public bodies have a duty to stand up and challenge governments when governments act outside the best interests of the people who elect them. Universities and their cousins, polytechnics and wananga, are some of the few public bodies that do have this duty.

Our universities have a legal and moral duty to act as a critic and conscience for society; examining, thinking about and commenting upon the real world things happening in our communities.

Their duty to speak truth in the face of power is similar to the duty journalists hold, and it is an important facet of our democracy. Sometimes that duty comes with great danger.

In many parts of the world, governments throw academics in prison, beat them, exile them from their friends and family or even kill them for fulfilling their duty to academic freedom.

In recent weeks, Ukrainian academics shed their blood on the streets, and academics in Egypt went to prison for using their academic expertise to question their respective governments.

This duty to contribute to democratic debate - by actively practising academic freedom - that staff and students in universities, polytechnics and wananga have, means the minister's proposal to cut the independence of university and wananga councils is dangerous. Very dangerous.

The minister is proposing to change the people who sit on the governing councils of universities and wananga. At present, university councils comprise a group of people who represent the communities of that university.

They include staff, students, representatives of the minister, local employers and workers, and often other communities, such as former students or the local city council.

Under the minister's new law, only the ministerial appointees will remain. The councils will shrink in size.

That means the ministerial appointees will make up a larger percentage of the council, and the remainder of the council will be appointed based on their ''governance experience'' rather than the communities they represent.

The consequence of that change is the minister's voice at the council table will grow stronger because his appointees represent a greater proportion of the council.

Meanwhile, democratically chosen, independent people who have traditionally spoken for academic freedom and the duty of institutions (staff and students) to be a critic and conscience will lose their seats to people with ''governance experience''.

The Government imposed a similar law upon polytechnic councils in 2009. Since then, it has become clear the ''governance experience'' is a euphemism for big business directors, lawyers and accountants. All those people have a crucial role to play on university councils.

However, our existing councils already make spaces available for them. Their contribution should not come at the expense of the democratic voice of staff, students and communities.

For universities to fulfil their duty to academic freedom, and to be the critic and conscience of society they need three things: 1. They need enough independence from the Government and from other powerful organisations so that they can safely challenge those in power without coming under undue pressure from those organisations to back down. 2. They need to be as democratic and representative as possible so that they have the internal support and strength of their communities when they do choose to challenge those in power. 3. They need to reflect all the people that make up their local communities so that it is not just one voice that dominates those councils - whether it be ministerial appointees or the spokesmen for big business. A strong council needs to comprise all these voices, not just some.

The minister intends to pass this law this year. So far, his only justification is that he wants councils to be more nimble and agile.

He has produced no evidence that the type of council he proposes will be more nimble and agile. In fact, some of the most highly regarded universities in the world have much larger councils than New Zealand universities, made up of dozens of democratically elected representatives.

Students, staff, council members and vice-chancellors all say they do not want the law. The University of Auckland's vice-chancellor notes it will harm the reputation New Zealand universities have overseas. New Zealand's universities rank well by world standards, especially given their comparatively small size and recent lack of government support.

It is bizarre the minister would want to change a governance structure that has served the country so well for such a long time. Smaller councils with fewer voices are not more nimble or agile.

They are simply more myopic.