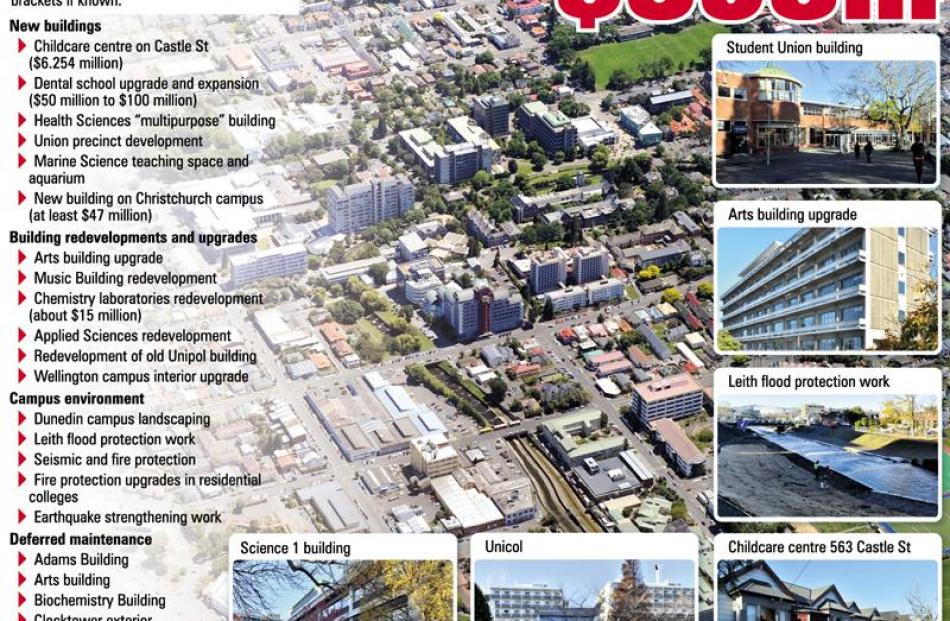 A University of Otago building programme worth nearly $358 million will be ''massively positive'' for the Dunedin economy, Otago Chamber of Commerce president Peter McIntyre says.

The figure the university has earmarked for construction, from last year until 2020, was revealed in the university's priority development plan, obtained by the Otago Daily Times under the Official Information Act.

The plan includes 22 projects, 20 of which are in Dunedin.

The university declined to reveal the budgets for individual projects, citing commercial sensitivity, but put the total budget for the work at $357.8 million.

It includes previously reported projects, such as the $50 million to $100 million plan to ''upgrade and expand'' its ageing school of dentistry, a new facility for its Christchurch medical campus, and new projects such as replacing chemistry labs and upgrading its arts building.

Anything like that is really positive, particularly in this sort of economy where we have struggled ... over the last decade to really grow population base and GDP. Any investment which is into the hundreds of millions is ... massively positive,'' Mr McIntyre said.

It was also good the university's spending would be spread out until 2020.''

The [Dunedin City] council has got into trouble where they have started too many projects all at the same time, which puts capacity constraints on the construction sector and also a burden on the ratepayers.

Being staged means there are not going to be those ups and down, so it probably puts our construction sector on a better footing,'' he said.

The amount of work the university had planned showed it was confident about its future, which was a ''vote of confidence'' for the city, he said.

Mr Herd said the university's planned spending would lift the city's non-residential construction market by ''at least 50%'' and provide a ''big injection'' for the struggling sector.''

It's been some time since we have had projects of that scale in the Dunedin region and, as a result, the construction industry in the city has been very depressed for at least the last three or four years,'' he said.

The building plans would give construction companies the confidence to retain staff and were likely to lead to more jobs for the companies which picked up tenders for the larger projects.

Naylor Love, which had already worked with the university on projects such as the University Plaza and the Marsh Study Centre, would be among the companies competing for tenders, he said.

University chief operating officer John Patrick said the projects were included in the plan for a number of reasons, including to accommodate growth, to improve building layout and efficiency and health and safety.

Asked how the university could afford such a large amount of work, given what it had previously described as a ''difficult'' funding environment, Mr Patrick said: ''The University of Otago has a fiscal strategy that is designed to provide funding for capital development.''

''The current tougher economic climate was forecast and steps have already been taken to ensure that the university's fiscal targets can be achieved.''

Mr Patrick gave further detail about some projects that had previously not been reported including a plan to build new chemistry laboratories, used by first-year health sciences and sciences students.

Mr Patrick said the planned ''health sciences multi-purpose building'' was intended to provide space while other construction work was undertaken, in particular for the dental school project.

''As the seismic strengthening projects in the medical precinct take shape and the design of the dental school redevelopment progresses, the requirements for this building will become clearer,'' he said.

The university also planned to redevelop the old Unipol building in Anzac Ave, but no decision had been made about what it would be used for.

Mr Hunter said he was ''very pleased'' with the science projects in the plan - the building of a new chemistry laboratory and rehousing the department of applied sciences in the St David 2 building.

''The first-year labs one has really been necessary for a while and so I am really pleased that we have got the go-ahead, because it's a critical part of the building for the chemistry department,'' he said.

The development would involve putting the labs, which were used by about 1800 students a year, on the ground floor of the Science One building, instead of the first floor where the labs were now.

''They were designed in the early 1960s and chemistry has changed since then, so it's not really an appropriate facility for what we are trying to do.''

Replacing the ageing labs was part of a ''wider picture'' which would eventually include the creation of a ''science hub'', possibly including building an atrium linking the Science One building and the Biochemistry building.

However, it could be ''some years away yet'' before the rest of the work was undertaken.