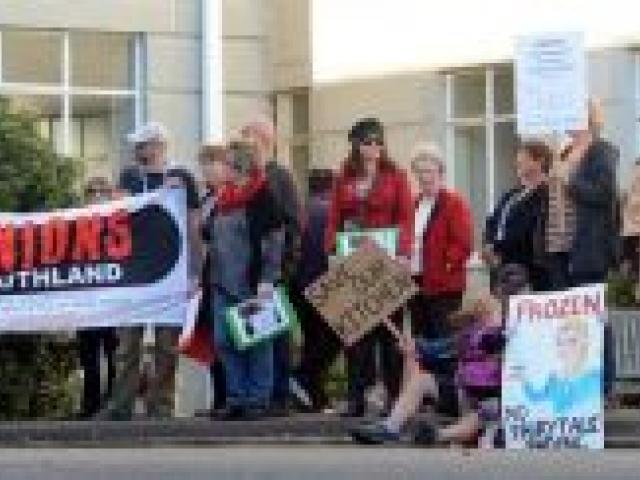 Protesters gather outside Wakari Hospital before the meeting. Photo by Peter McIntosh.

The Southern District Health Board food services decision is a public relations debacle, just when the board needs public support.

The SDHB appeared nonplussed by the public concern, and a lack of communication was acknowledged by chairman Joe Butterfield this week.

But while communication has been abysmal, it is doubtful the public would have bought the idea of the 15-year deal with a multinational corporation even if the board was upfront about the details.

The public is fed up with southern job losses and local infrastructure being downgraded.

People are increasingly sceptical of claims that corporates are superior to local long-standing arrangements.

And regardless of whether outsourcing is seen as a good idea or not, the two-year wait for kitchen workers while the delay-ridden programme ground on has been grossly unfair, generating stress and mistrust.

The revelation in March that Meals on Wheels would be trucked from Auckland spurred interest in what had previously been a difficult issue for the public to relate to.

The public was never formally consulted on the idea, and information had to be eked out by media inquiries to the board, which often had to consult Compass or Health Benefits Ltd before responding.

The board was disappointed recently over a lack of public interest in regional strategic plan meetings, but seems ill-prepared and bemused when the public's interest is piqued by an issue.

It was also surprised by opposition to the dumping of Presbyterian Support Otago as a home support provider a couple of years ago.

The southern board arguably has the least to gain, and the most to lose, from the Compass contract.

It is furthest from where many meals will be prepared, and has little need for equipment investment in its kitchens.

Damage to the board's brand and relationship with an increasingly disaffected public is arguably worth more than the projected savings from outsourcing.

Faced with a ballooning deficit, the board is also pushing 5% cuts to health services, both in its own services and in those it funds in the community.

Rural hospitals are the most vocal in opposition, but the cuts will be felt more broadly.

Mr Butterfield warned at yesterday's meeting the South could face years of cuts.

There is a sense of vacuum at the board, as no replacement has been named for the departing Mr Butterfield, whose retirement was confirmed in February.

This week, the Otago Daily Times was again told by Health Minister Dr Jonathan Coleman's office that there was ''no update'' on naming a replacement.

There is persistent speculation no-one wants the job, and talk that Dr Coleman might dissolve the board and install a commissioner, a suggestion he has rejected.

It is not the time to alienate the public, and if the board had no choice in adopting the food proposal, as many suspect, it should have made that clear.