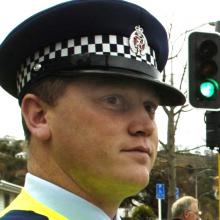 Constable Jeremy Fraser Buis
The stalker who harassed a Dunedin businessman for two and a-half years can now be revealed as a police officer.

Constable Jeremy Fraser Buis (39) was sentenced to 200 hours’ community work and ordered to pay the victim, Danny Pryde, $15,000 after he was found guilty of criminal harassment, threatening to do grievous bodily harm and intentional damage after a judge-alone trial in March.

Southern district commander Superintendent Paul Basham confirmed yesterday the defendant had been suspended in February 2015 and an employment process was ongoing.

Buis had been on paid leave for nearly two and a-half years, which Supt Basham stressed was standard employment practice.

But yesterday, the Otago Daily Times successfully appealed the ruling in the High Court at Dunedin.

Counsel Charlotte Carr said: ‘‘To treat a police officer differently could lead to ridicule and contempt from the public and to suppress a particular occupation invites a perception that certain classes of persons will be treated differently before the court.’’

Justice David Gendall said the judge’s grounds for the suppression of Buis’ profession were unclear and there was ‘‘significant public interest’’ in the order being quashed.

‘‘Ordering the suppression of Mr Buis’ occupation because he is a police officer undermines the principle that all members of society are equal under the law,’’ Justice Gendall said.

‘‘Police are not entitled to special treatment.’’

The news was welcomed by Mr Pryde, who had voiced his disappointment at the situation after sentencing in April.

‘‘I had to be very careful about what I said.’’

Mr Pryde was quick to point out it was Buis, not the police, who wanted his profession kept under wraps.

The victim, who owns an engineering firm, had never met the defendant until June 14, 2012, when Buis parked in a location that blocked an entrance to Pryde Engineering.

Buis’ car was ticketed at Mr Pryde’s request and it set in motion a bizarre, varied and prolonged campaign.

There was a slew of anonymous text messages, the victim’s contact details were plastered around a gay hangout and Buis created a fake homosexual dating account using photos from Mr Pryde’s work website.

The businessman said it had been ‘‘a living hell’’ and in the midst of the harassment he believed he was going to be killed.

Because of yesterday’s ruling, the ODT can now reveal other evidence turned up by Invercargill officers tasked with running the case.

During the trial, the court heard from Buis and two of his former colleagues, who spoke about the pranks they pulled on each other.

‘‘It was just a bit of banter-type thing that we had going,’’ one said.

He admitted plastering Buis’ police pigeonhole with notes on which penises were drawn.

In his locker nearby, the officer had covered the inside with half-naked men, including All Black Sonny Bill Williams.

There was also evidence of a chat on a messaging app between Buis and colleagues on which they shared a photo of Mr Pryde with phallic images drawn on.

‘‘I guess it’s just boy chat. I was being stupid. It could be a way to de-stress from work after a hard day. We were just being idiots,’’ one of the participants said.

Superintendent Basham said it was not part of a wider problem.

‘‘The behaviour reported on through the case is not reflective of the wider culture in the police in 2017,’’ he said.

Of the 700 staff in the region the vast majority acted professionally, but ‘‘you have a few who occasionally let the side down’’, he said.

A speak-up policy was in place encouraging staff to report any improper behaviour, Supt Basham said.

‘‘Those conversations are happening regularly and I think we have a generation of staff coming through that are mindful about those issues,’’ he said.

Campaigner and sexual abuse survivors’ advocate Louise Nicholas told the ODT there had been a drastic change in attitude in the past decade and commended police for their work.

But it was still frustrating to see cases such as Buis’, she said.

‘‘It was absolutely inappropriate and really, really disappointing that the colleagues around those guys were allowing that to happen,’’ she said.