By Wyatt Ryder
0 Comments
It may just look like a boat, but a former Highlander is determined to keep his family vessel afloat.

The boat, named Matakana, is co-owned by Andy Rich, who said it had had so much work done to it that it was practically new.

Some had questioned whether all the work was worth it, and many had asked him why he had not just bought a new boat.

But he had fallen in love with a piece of family history.

His father bought it in 1991 and made some basic repairs, but syndicated the vessel in the early 2000s. 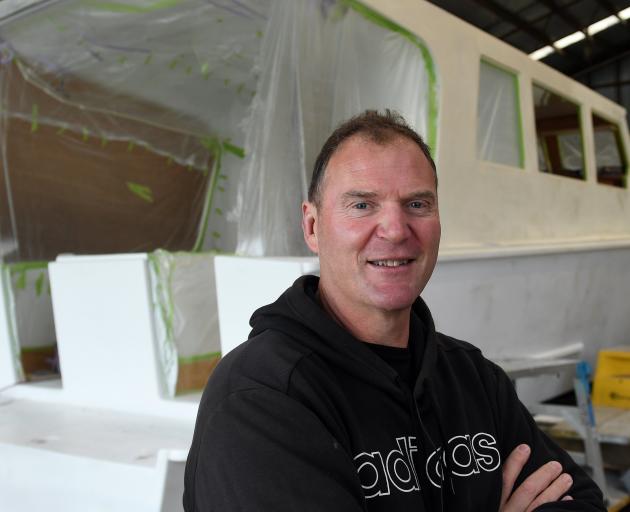 Sitting beside his long-running family boat restoration project is co-owner Andy Rich. PHOTO: STEPHEN JAQUIERY
"He bought it when he was 50, which is remarkable because I’m doing it up when I’m 50." There were a lot of memories in the boat, and he hoped to make many more.

"It’s too easy to let a bit of history just die."

Mr Rich bought into the boat with others and shared the cost of maintenance and repairs.

He had spent nine months working on the vessel at Carey’s Bay Marine Services, and planned to have it ready in the next few months.

The Vindex boat was built in 1972 out of kauri, which was rarely used nowadays due to protections on the trees, he said.

The back and roof had to be completely rebuilt, as the wood had rotted.

The boat cost a lot of time, money and labour, but it was tragic to see it left to rot, he said.

"The bones below the waterline are actually really good."

As he scraped back the paint, it was interesting to see the layers that had built up over the years.

He was confident he would know every inch of the boat once it was done.

Mr Rich, who lives in Wellington, had commuted a lot to work on the boat.

"I’ve been supporting Air New Zealand a lot," he joked.