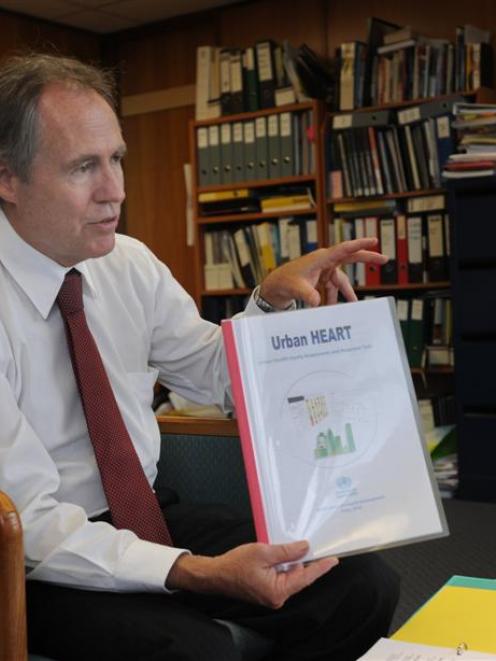 Dunedin City Council chief executive Jim Harland was hand-picked by the World Health Organisation to help it come up with a strategy to do just that.

New Zealand was one of 10 countries with representatives at the meeting.

Mr Harland said the fact two New Zealand representatives were chosen to attend, he and a Ministry of Health official, showed the standing of New Zealand in urban health and equality.

WHO was developing a strategy to improve urban health, and help ensure all groups, regardless of race, age or ethnicity, could access services, he said.

WHO wanted to develop better reporting systems of health indicators to determine what needed to be improved and to monitor progress.

A key organiser of New Zealand's Quality of Life surveys that focus on key health indicators in New Zealand cities, Mr Harland spoke to the group about the way New Zealand collected and shared health data.

New Zealand local government was reasonably unusual in global terms, because although it did not deliver health services, it had to take into account the health and wellbeing of residents, Mr Harland said.

Obvious examples were water, sewerage and rubbish services, but less obvious examples included the correct use of lighting, which reduced the risk of violent street attacks, and providing facilities such as sports stadiums and libraries, which improved mental health.

WHO health initiatives often focused on health in rural centres, where the issues were different, as health tended to be driven by women in small groups, where organisation was easier because people knew each other.

In urban centres, people tended not to know their neighbours.

New Zealand's good reputation for health equality and reporting was due not only to a small population, but probably also because it had a history of progressive thinking on social issues, such as votes for women.

WHO paid for Mr Harland's trip, including flights and expenses.