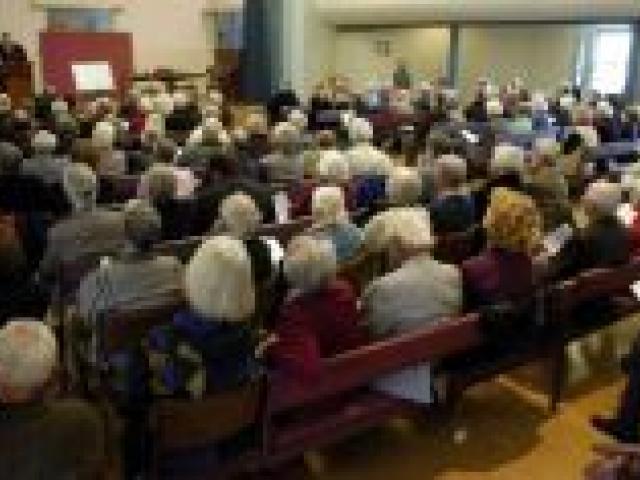 The 'Hands off Harrop' group meet to oppose the council's proposed extension plan. Photo by Craig Baxter.
A packed meeting at Burns Hall heard impassioned arguments against the Dunedin Centre extension last night, as speaker after speaker attacked the plan.

Hands off Harrop, a group formed to oppose what has become a planned $45 million redevelopment of the Dunedin Centre, and in particular the proposed Harrop St atrium addition, held a public meeting that attracted about 130 people.

It called on the local authority to ‘‘listen to the people'' and upgrade the Dunedin Centre within its existing envelope.

Two of the meeting's panellists, Dunedin architects Tim Heath and Ted McCoy, told the meeting the urban space provided by Harrop St needed to be saved.

Mr Heath said the architects given the job of producing the centre's plans appeared not to have been given scope to include urban design.

‘‘This design must be considered as part of a bigger urban design picture.''

He said the group was not opposed to the redevelopment of the town hall.

‘‘We firmly believe this can be done without destroying Harrop St for all time.''

Lawyer Len Andersen said the council could be prosecuted for ignoring its district plan, which specifically mentioned the view from Moray Pl to First Church, which Hands off Harrop wants to protect.

‘‘I am surprised, really, that the council wants to proceed.''

But he warned the meeting not to be complacent, and used the orange Mitre 10 Mega building in Andersons Bay Rd as an example of what could get through.

In the public part of the meeting, former city councillor Lee Vandervis said the design was not functional for services such as lighting and sound, and promoters might skip Dunedin in future rather than use the building.

Cr Paul Hudson left the stage after heckling when he spoke, but returned to tell the meeting it would not achieve anything by antagonising staff and councillors.