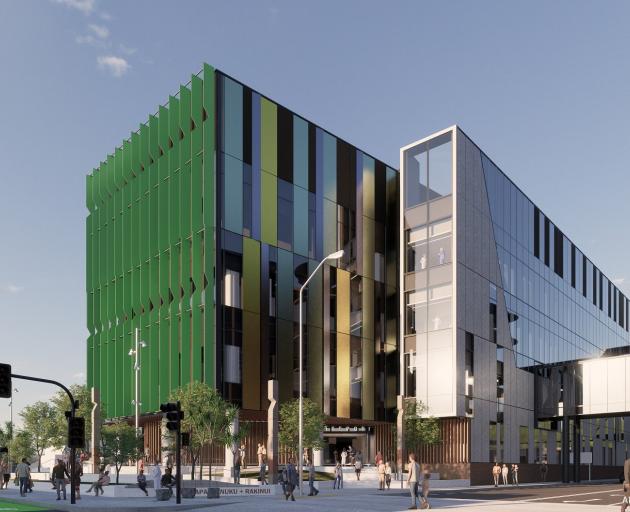 The outpatient facility, the first of the two hospital buildings to be constructed, is planned to open in early 2025.

It will have a gross floor area of about 15,000sq m, and at this stage is expected to have 1088 rooms throughout four storeys.

Hospital planners have just received developed designs from the architectural firms involved in the project, and programme director Mike Barns said his team would take the next four months to assess, check and cost the plans, the third of four design phases. 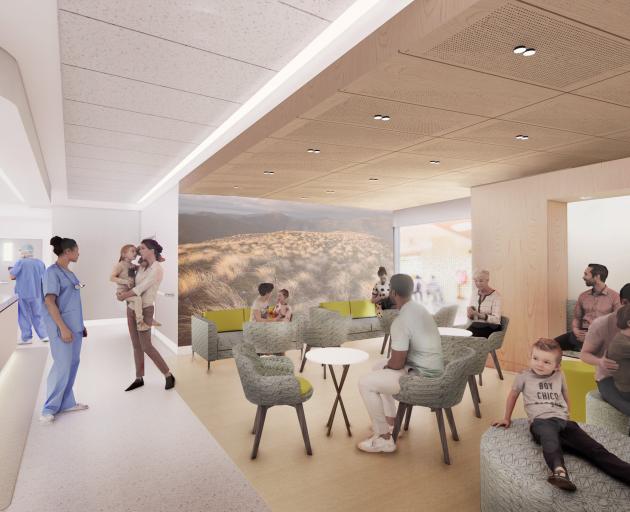 "We have only just received it and are evaluating it now, so we won’t know if it is good, bad or indifferent for another month or so, but we are really excited."

The facade, which is inspired by the patterns of Maori weaving, should resemble the latest drawings, although cost factors might determine some choices regarding building materials, he said.

"As we get closer and closer to the build set, which I think will be February next year, it will be ‘That’s what we’re building’, but until then it is thematic.

"This is what we are going to build right now but we have to accept that, when quantity surveyors come back with pricing, we might need to alter some things."

The drawings released to the Otago Daily Times yesterday included the first renderings of any interior spaces in the new hospital complex.

The foyer, originally intended to be grander, had been scaled back for budget reasons, Mr Barns said.

The exterior and interior design had been based on conversations with local iwi.

"I haven’t see this level of attention to detail on any of the projects I’ve worked on," Mr Barns, who has been involved in several international hospital building projects, said. 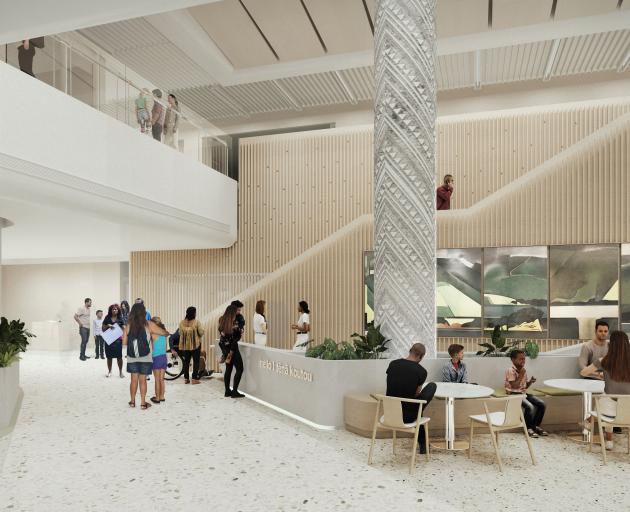 Aspects of the design had been altered to take in to account lessons learned from the experience of overseas hospitals during Covid-19.

Many of the inpatient building’s rooms were small consultation rooms, both for privacy and infection-control reasons.

Two bridges, a second-storey and a third-storey bridge, would connect outpatients with inpatients, and one would be public and one for staff, again for infection-control reasons.

The inpatient building is closely modelled on the new Christchurch Hospital, a project which was much delayed and had budget issues.

Mr Barns said several lessons had been learned from that experience, and that was why building firms were already working with designers.

"The mistakes that were made in Christchurch we are sidestepping here by getting contractors involved much earlier in the conversation, so they will contribute to the design for a longer period."

While the outpatient team had one more design phase to complete, a great deal more work remained to go on the nine-storey inpatient building, Mr Barns said.

"That is a much more complicated building and has a lot more services that will go into it, so that will necessarily take a little more time.

"In the outpatients building there is a requirement to accommodate those traditional functions as well as take the demands from the existing hospital here as soon as possible."

Final outpatient building plans should be ready for Ministry of Health approval by Christmas.

Green cycle lanes up the side of the new hospital ... A & E at the bottom to catch those inexperienced cyclists out !!

Council had to use up that 6,000 litres of green paint somewhere I suppose ....

We see plans developing for the new hospital which from concept have shrunk due to budget restraint.
Sadly that term is used again in this planed building.
We are heading towards a cottage hospital!
I wish the people designing and planning this new hospital could have seen the waiting, crowding, overwhelmed and stressed staff in Dunedin hospital ED this week. Please do not use budget as a excuse to keep downsizing the new hospital to less than what it is now. I believe the plan is to send most complex cases to Chch.
Health professional.

So we have a picture of what it may look like, should all of this not been done first, and in reality a picture of a match box be more appropriate???

So many places in the world have architects who are able to incorporate functionality with design. Unfortunate the last iterations shown in the O.D.T. have shown a hospital that looks dated, cold and frankly lacking ambition. I'm not sure what the green rudders on the front of the building are for but they will be a window cleaners nightmare and with a sea breeze howling across them, I can guarantee noise. Also where will helicopters land? Perhaps less money spent on outside aesthetics and more on functionality and interiors may be a good start.