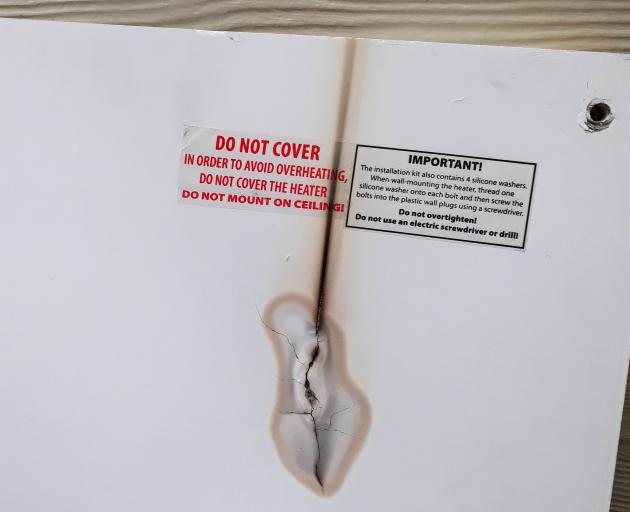 Janice Murphy bought  the Euromatic 425W Wall Panel Heater as one of a twin-pack for $89 from Bunnings Warehouse in South Dunedin last month.

She mounted one of the heaters to the wall, and had only used it for a few hours when she "started to smell a funny smell".

After checking the heater, she noticed it had sustained a significant crack and scorch marks on both sides of its white panel. It was also emitting fumes and the wall behind it had been lightly singed. The damage to Mrs Murphy’s wall was superficial, but the experience left a sour taste, as well as the lingering smell.

"Had we been out it might have burned the house down.

"I wouldn’t ever use another one again."

Bunnings New Zealand general manager Toby Lawrance said on Monday, in an initial statement,  that the heater had recently been "isolated," meaning it was currently unable to be bought  by customers, after two reported incidents.

"... we are currently conducting the appropriate testing to ensure customer safety."

"If a recall is required we will advise customers and work closely with the regulator."

On Wednesday,  Bunnings said Tempo, the supplier, had recalled the heater, and anyone who had bought  the model would receive a full refund.

"Tempo has decided to recall this product and we will be supporting them in this action.

"Customers can return this item to their local store for a full refund."

Consumer NZ head of research Jessica Wilson said retailers need to take action quickly when they became aware of faulty products. If a customer’s home was damaged by a faulty product they could be entitled to compensation from the retailer, she added.

"Retailers need to act promptly when there are issues.

"Where a faulty heater has caused damage to the consumer’s home, the retailer can be held liable for the repair costs."

In November last year, some models of wall-mounted panel heater sold at The Warehouse, Mitre 10, Mitre 10 MEGA and Goldair stockists were recalled, following concerns they could overheat and cause a fire. The affected brands were Goldair, Living & Co, EcoSaver, Nouveau and Number 8.

• More information on the specific models  at: recalls.govt.nz.