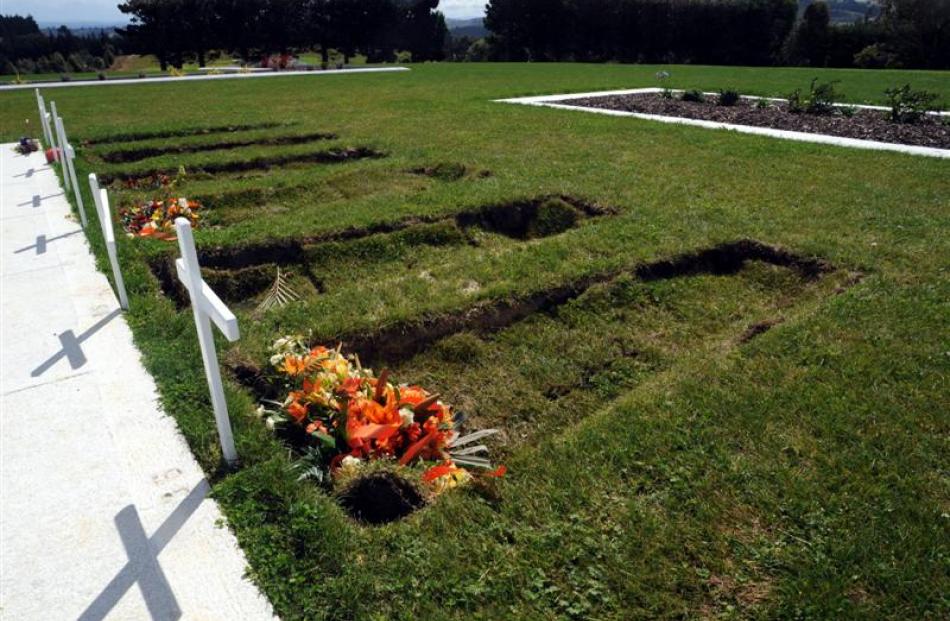 Soil will be added soon to sunken graves, including these photographed at the Dunedin Cemetery on Blackhead Rd, on Saturday. Photo by Peter McIntosh.

Sunken graves around Dunedin will be topped up with extra soil over coming weeks.

Some graves around the city, particularly those freshly dug, have settled lower following heavy rain.

The outlines of all eight grave sites at the new Dunedin Cemetery on Blackhead Rd were clearly visible at the weekend after subsidence caused by heavy rain.

The most severely affected graves had depressions the size of shallow bath tubs.

The most pronounced depression was about 30cm deep and had pooled with water, in which flowers from a wreath were floating.

Graves at Dunedin Cemetery were relatively recent, he said, and some in other cemeteries around the city had probably dropped too.

"It's something that we monitor and we'll be topping those graves up to bring them level with the surface again," he said.

He said new graves tended to go through a settling process, which was more pronounced after heavy rain.

The council's contractor would top-up sunken graves in the next couple of weeks, he said.

Mr Matchett was not aware of the sunken graves prompting any public inquiries or complaints.

Dunedin Cemetery was opened on 12ha of land, on the corner of Blackhead Rd and Emerson St, three months ago.

It has room for about 6000 burial plots and should service Dunedin's requirements until about 2080.

The cemetery was constructed to relieve demand on older Dunedin cemeteries, such as Andersons Bay and Green Island, which were close to capacity and in which no new plots were available.