Heavy snow on way for South

Motorists are urged to take great care on southern roads and farmers to shelter stock as a cold snap is expected to bring heavy snow to Otago and Southland and other southern areas from Monday night.

MetService meteorologist Claire Flynn said from 9pm, rain was expected to turn to snow which may accumulate down to 300m, affecting some hill suburbs in Dunedin.

Between 5cm and 10cm would accumulate above 400m and significantly greater amounts were likely above 600m.

Queenstown and Wanaka could have snow to lake-level, and places like Naseby were likely to get heavy snow.

Miss Flynn said it would be wise for farmers to move stock to sheltered areas, and for drivers to take extra care on the roads.

"You’ll certainly be able to see it on the hills around Dunedin when the weather clears."

Temperatures reached 19degC in parts of the region yesterday but were expected to plummet as low as -1degC today.

She said the change was caused by a low-pressure system in the Tasman Sea and a strong cold front from the Southern Ocean.

It would bring severe weather to much of the country over the coming days.

Check out all that snow! 🌨️Our high-res model indicates a heavy snow event is coming for the Alps along with accumulation in the mountain passes Monday night through Tuesday.Be sure to check with @NZTAOS/@NZTACWC for road conditions! pic.twitter.com/GC9UjZXtxG— NIWA Weather (@NiwaWeather) April 9, 2018

The heaviest snow was forecast to fall tonight, but tomorrow there would still be showery southerlies, with potential for more snow in Otago.

Sea conditions along the Southland and Otago coastlines were also forecast to be "rough" tomorrow, Wednesday and Thursday, with winds rising to 35 knots at times.

Between 1cm and 2cm may accumulate above 300m on the Northern Motorway from Dunedin to Waitati (SH1) from 11pm on Monday until 6am on Tuesday.

A Dunedin City Council spokesman said grit trucks, sweepers and graders were on stand-by in case streets in higher-altitude suburbs were affected by snow. 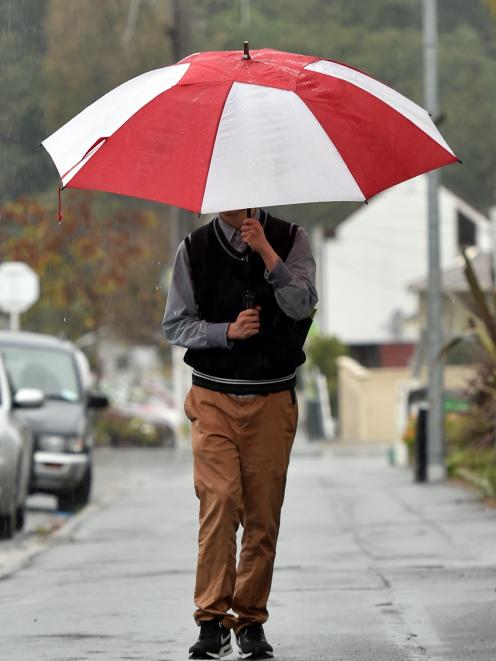 Road users in the South should be prepared for snow and delays tonight and tomorrow, the New Zealand Transport Agency advised.

Roads likely to be affected in Otago and Queenstown

The MetService advised that rain was expected to turn to snow on all alpine passes, the Crown Range Road and the Milford Road overnight on Monday.

LEWIS PASS
From midnight on Monday until midday on Tuesday, 20cm to 30cm of snow may accumulate near the summit with lesser amounts down to 400 metres.

ARTHUR'S PASS
From 9pm on Monday until midday on Tuesday, 30cm to 50cm of snow may accumulate near the summit with lesser amounts down to 400 metres.

PORTERS PASS
From 9pm on Monday until midday on Wednesday, 40cm to 60cm of snow may accumlate near the summit with lesser amounts down to 400 metres. Snow flurries may reach 300 metres at times.

LINDIS PASS
From 9pm on Monday until 6am on Tuesday, 5cm to 10cm of snow may accumulate about the summit with lesser amounts down to 400 metres. More snow showers were expected to return from Tuesday evening.

HAAST PASS
From 9pm on Monday until 6am on Tuesday, 3cm to 6cm of snow may accumulate on the road above 400 metres. Further snow showers were possible on Tuesday evening and early Wednesday morning.

CROWN RANGE ROAD
From 9pm on Monday to 5am Tuesday, 5cm to 10cm of snow may accumulate about the summit with lesser amounts down to 400 metres. Further snow showers were likely on Tuesday afternoon and evening.

MILFORD ROAD
From 9pm on Monday until 3am on Tuesday, 2cm to 5cm of snow may accumulate near the summit with lesser amounts down to 400 metres. Further snow showers were expected Tuesday afternoon until Wednesday  morning, mainly south of Lake Gunn. From 3pm on Tuesday until 9am on Wednesday  expect a further 2cm to 5cm above 300 metres.

Federated Farmers Otago president Phill Hunt said the cold snap would be an issue for farmers who had "freshly shorn" stock, and they should be moved to more sheltered paddocks.

He said farmers would be keeping a close eye on the weather, in case it deteriorated further, but for most, the southerly blast was more of a gentle reminder that winter was just around the corner.

"Most farmers won’t be particularly concerned about the weather.

"Snow doesn’t tend to last long at this time of year."

• Snow may accumulate down to 300m

•Between 5cm and 10cm could accumulate above 400m

•Significantly higher amounts are likely to fall above 600m

•Temperatures could drop as low as -1degC in parts of Otago

Lara Yeo (24), of Christchurch, makes the most of the beach at Doctors Point, before rain set in yesterday afternoon. Photo: Peter McIntosh
Comment now