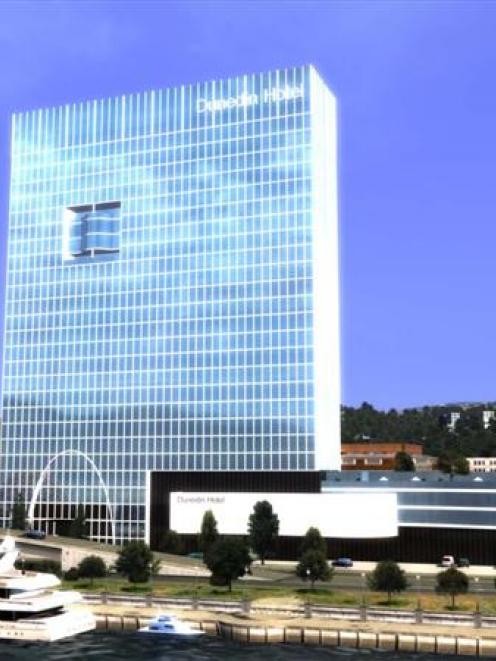 The proposed 27-storey waterfront hotel. Image supplied.
An Environment Court appeal that could decide the fate of Dunedin's proposed waterfront hotel is destined for a hearing, unless the developers reconsider the height of their building, an opponent says.

Mr Hardie, in a memorandum to the court, said height was the ''fundamental issue'' and would be again during the court's mediation process.

However, mediation that sought to reach an agreement - thereby avoiding a time-consuming and costly hearing - would only achieve ''some purpose'' if the developers were prepared to discuss the hotel's height, he believed.

''In the absence of a willingness to discuss a more modest proposal, the matter will need to go to a hearing,'' he said.

His comments came after Betterways director Jing Song, of Queenstown, this week expressed frustration at the time, cost and slow progress involved in behind-the-scenes talks with the Dunedin City Council.

She also appeared to step back from an earlier offer to compromise on the hotel's height, saying there were no alternative plans on the table.

Betterways lost its bid for resource consent for the controversial 27-storey, $100 million tower last year, prompting an Environment Court appeal that was placed on hold while talks with the council continued.

If talks broke down, Betterways could pursue the project by trying to reach agreement with all parties through the court's mediation process, or by pursuing a costly and time-consuming court hearing.

Betterways lawyer Phil Page, in a memorandum to the court last month, suggested a new timetable that would give the company until March 28 to announce its next move.

Court staff said at the time that was yet to be accepted, but they could not be contacted for an update yesterday.

In his memorandum, Mr Page also said the ''key issue'' remained connectivity between the proposed hotel and the central business district, while Ms Song this week said planning issues were still to be addressed.

However, Mr Hardie, in his memorandum, said Mr Page's view ''fails to either disclose or deal with the fundamental issue'', which was not ''some walkway connection'' but the proposed hotel's height.

''That was the reason the initial application drew more submissions in opposition than any other application that had ever been filed with the Dunedin City Council.''

Those concerns would re-emerge in evidence to the Environment Court, meaning mediation would work only if the hotel's height was up for discussion, he said.

Betterways should be required to tell the court whether it would be prepared to discuss the hotel's height during the mediation process, he said. If it was not, the court should proceed to a hearing ''so that the court can rule on that fundamental issue'', he said.

Mr Hardie's comments came after he argued against the hotel on Capri's behalf during last year's resource consent hearing.

However, he was also forced to deny commercial competition was behind Capri's opposition, after being questioned about the company's motives.