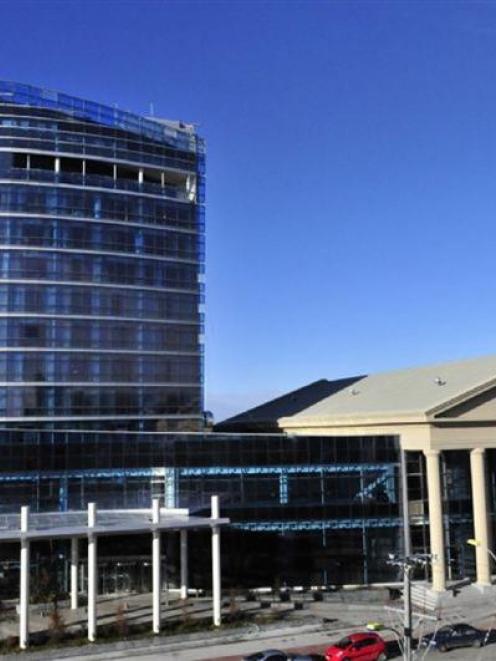 Hotel Dreams del Estrecho in Punta Arenas, Chile. Photo supplied.
The proposed waterfront hotel and apartment block is in the news again. A city council committee declined the application for its resource consent.

Its promoters, Betterways Advisory Ltd, lodged an appeal, which is formally against the Dunedin City Council.

Other groups and individuals known as section 274 parties made depositions about the action and your columnist is one. My submission argued the committee's decision should stand.

The appeal is being heard in the Environment Court in Christchurch under Judge J. R. Jackson.

It is usual in such cases for the contending parties to attempt to reach some negotiated agreement so the appeal doesn't have to proceed.

This is happening and Dunedin's Mayor Dave Cull has gone to the length of engaging out-of-town planners to try to find a solution.

But in the middle of February it was reported that one of the project's principals, Ms Jing Song, now regarded it as ''a long shot'' (ODT, 14.2.14).

But then again, last week, it was reported the city council had discussed the matter, the promoters' spokesman, Steve Rodgers, was ''very optimistic'' and an announcement was expected soon (ODT, 26.2.14).

No comment was recorded from Ms Song and at the time of writing no announcement had been made. One could be forgiven for wondering what's happening.

Although I am a party to the appeal, I am not privy to the negotiations, but I do receive copies of the legal exchanges.

Looking at those and some of the things which have been said by the parties in public, one gets some idea of what may be under consideration.

At a very early stage, the city's property manager, Robert Clark, endeavoured to interest the developers in other sites. They stuck with 41 Wharf St and also their 28 floors, 27 above ground and a basement.

After the consent was declined, Ms Song seemed ready to reduce it by one or two floors but more recently seems to have ruled that out.

At the end of January, the project's lawyer, P.J. Page, asked the court for a time extension to complete negotiations, saying the central issue was ''connectivity'', the long walk from the site to any shops.

This has been raised at times and it has been suggested a bridge over Wharf St and the railway tracks to Queens Gardens at Rattray St would solve it.

In reply, another S274 party, Capri Enterprises, which wants the decision upheld, submitted that connectivity is not the central issue, the height on that site is, quoting part of the decision; that a bridge isn't part of this application and would need its own consent.

Unless the developers were prepared to discuss the height, negotiation was pointless. The appeal should proceed instead.

Judge Jackson responded by granting an extension until the end of April and directing the developers to advise other parties if they are prepared to mediate on urban landscape issues generally and height in particular.

Last year, Mr Cull was reported as saying the outcome of negotiations might be a plan change. Mr Page's submission suggests he is thinking of a new application involving a bridge.

When she called the project a ''long shot'', Ms Song mentioned the time and money spent after any agreement with the council on ''a fresh consent application or another formal process''. This seems to confirm a new application or a plan change are the options she's considering.

Graham McKerracher, the council officer handling media inquiries, told me near noon on Thursday that a memorandum of understanding about a way of going forward had been drafted, that it had been expected Betterways would have signed it but so far the council hadn't heard back. It expects to and you may read about it before this appears.

Whether it does and whatever it says, what are the prospects for the options?

A new application with a bridge but still with a building of that height and design on that site would surely be declined for the same reason the first one was: the incompatibility of such a building with the requirements of the district plan to maintain the central city's heritage values and present character.

A plan change requested solely to facilitate this project would surely fail for the same reason. It is not as though this is something peripheral to the plan but something the decision says is central to it. I am not a planning lawyer but that's how it seems to me.

Judge Jackson said ''it may be useful [or not]'' to draw the parties' attention to the Hotel Dreams del Estrecho in Punta Arenas in Chile.

That is a tall, glass-clad waterfront hotel which has a classical revival component built into it. But Dunedin is not Punta Arenas. Our district plan would not allow it - thank goodness.