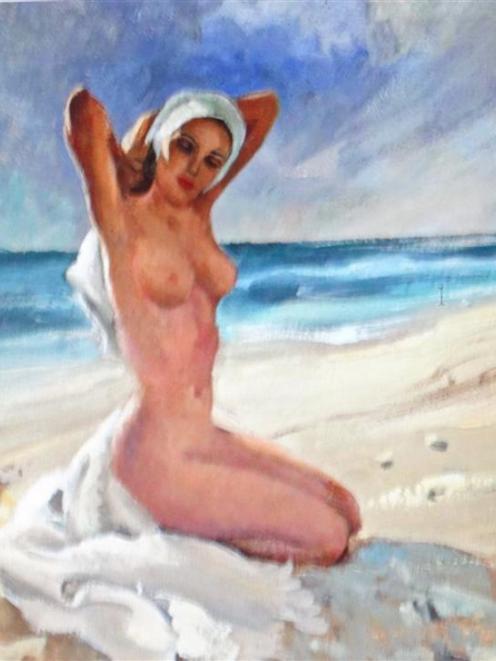 Peter McIntyre's Nude on the Beach from the late 1940s, oil on board. It is for sale today at Aesthete Gallery, Hamilton, with an estimated price of $18,000 to $20,000. Photo supplied.
An unusual picture by a well known Dunedin artist is being offered for sale in Hamilton today.

Peter McIntyre (1910-1995) is best remembered for his paintings of combat in World War 2, some portraits and New Zealand landscapes but Nude on the Beach is a figure study.

It is said to have been made not long after he returned from the war, at which time he was in Dunedin. The beach is presumably one of our strands and the surly sky, crested waves and pale sand fit the case.

McIntyre was born here the son of an older artist of the same name. Peter McIntyre senior (1862-1932) had emigrated from Scotland and worked here as a commercial artist.

Growing up in a household where the pursuit of art was taken as normal, which he noted was unusual in New Zealand at the time and important to him, McIntyre drew from an early age although his father never taught him.

He went to Otago Boys' High School and then to Otago University, not the School of Art, entering in the late 1920s, taking the BA course and intending to be a journalist.

A less than diligent student, he made pocket money from commercial commissions for drapery stores until his father advised him to take lessons from A.H. O'Keeffe, which he felt had a purgative effect.

With some insight he described his earlier fashion drawings as ''the first of my digressions into commercial art that were to spoil my work''. (The quote is from his autobiography The Painted Years published in 1962.)

He decided to pursue art seriously, went to England where he arrived in 1930 enrolling at the Slade in London in 1931. He continued until 1934.

He said visits to the Tate made him lower his estimate of Sargent, improve his view of Augustus John and Ambrose McEvoy while abandoning his ''old loves'' Frank Brangwyn and Russell Flint. He was shocked by but also drawn to Gauguin whose primitivism was something entirely new.

The Slade under Henry Tonks still had some of the creative spirit of John, McEvoy and Stanley Spencer but was also something of a ''finishing school'' for the daughters of the rich. It taught sound draughting based on Raphael and Ingres.

In his final year, McIntyre won prizes for composition and figure drawing. Throughout his 10 years in London, McIntyre lived in Fitzroy St, enjoying the Bohemian life, a party animal with an eye for an attractive woman and full of energy and fond of adventure.

He made sorties to France, Spain and Germany, aimed to be a professional painter and shrunk from the prospect of becoming a teacher in a provincial centre. But establishing himself as a professional proved hard and he soon reverted to commercial work.

He became acquainted with the productions of advanced contemporaries, mentioning Matisse, Picasso, Derain and Epstein, and had some interest in experimentation.

A suggestion he try abstraction was distasteful, apparently because it seemed to be offered as a way of making painting easier. Nevertheless, he said he did paint abstracts after he left the Slade. But such efforts were abandoned.

By the end of the '30s his practice was entirely commercial. In May 1937 he married Lillian Welbourn, who had been a Vogue model but was also a portrait painter. The marriage didn't work and when war broke out he happily joined the New Zealand contingent then being formed in London.

In Egypt, by 1940, he was made an official war artist by Lieutenant General Bernard Freyberg . McIntyre worked in this role in Crete and North Africa, frequently operating in arduous and dangerous circumstances and at speed.

He returned briefly to New Zealand to tour a group of the works raising funds for the Red Cross, before recording the Italian campaign.

By February 1946 he was in Dunedin, meaning to stay. While McIntyre's reputation had been made as a war artist, his practice began to flourish when he turned to New Zealand landscape. After a slow start his sales grew until he became the country's most popular artist.

His manner has been described as 19th century European romantic realism rejuvenated by selecting up to date images and motifs.

This is rather too generous. His speedily made war paintings, mostly watercolours, are really the kind of illustrators' impressionism commonly seen on the dust jackets of interwar novels and widely used in the English speaking world.

The formal portraits of this time at least sometimes achieve more gravitas.

One commentator said he's never seen a McIntyre nude before the one now for sale but his war paintings of sunbathing New Zealand servicewomen sold in the 1990s show the woman on the Dunedin beach is not unique.

McIntyre married again in 1949 and shortly after left Dunedin.