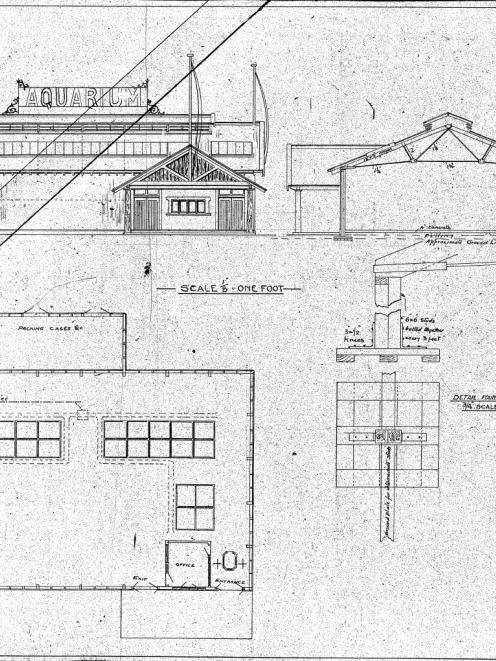 Logan Park Aquarium plans. Image supplied.
It seems an opportunity to renovate a significant historic building has been lost and instead it will be put at risk.

Unbeknownst to most people this complex incorporates the aquarium building constructed for the 1925 to 1926 New Zealand and South Seas International Exhibition.

I am among many people who have said the former art gallery building at Logan Park was the only structure on the site surviving from the exhibition.

But it was drawn to my attention in 2013 that this isn't so and that the nearby clubrooms incorporate the former aquarium.

This happened because the city council's former property manager Robert Clark had asked a local architect to produce a conservation plan for the building and that required a building history which I was commissioned to write.

The intention was the resulting document would be sent to what was then the New Zealand Historic Places Trust and is now Heritage New Zealand.

That has been done. But the building hasn't been nominated so is not on the path yet to having its heritage significance recognised.

It is not on the schedule of structures listed in the Dunedin District Plan, which is not surprising because that has not been updated for several years _ it's in the process of being updated now. It's a pity because it is scheduling which really confers significant protection.

Mr Clark has been replaced as property manager by Kevin Taylor. Mr Clark's development option for the Logan Park clubrooms has been dropped in favour of another with Sport Otago and other sports groups which would see some large development in the shadow of Butts Rd at the northern boundary of the park.

Apparently, Mr Taylor believes the building is ''stuffed'' while the architect I mentioned says it is in good condition. Its future doesn't look very promising.

I have argued it was probably designed by Edmund Anscombe (1874 1948), who was overall architect for the exhibition, although he didn't design all of the buildings on the site. Most of the exhibition buildings were made of temporary materials, although one was not.

The lenders to the art exhibition required a structure made of permanent materials so the exhibition gallery was made of brick, to a design of Mr Anscombe's. This was significant in the building's retention after the exhibition.

It was said by G.E. Thompson, the official chronicler of the exhibition in 1927, that ''the art gallery was the only permanent construction work done in the park''. That being so, one would expect the aquarium, like the other temporary structures, rested on a grille of heavy spread timber laid on the sand, had timber framed walls lined on the outside with asbestos, probably Fibrolite, or corrugated iron. It would have a mansard roof with some top lighting, the rest made of timber covered with Malthoid.

The clubrooms have both rimu and concrete flooring, the latter to support the weight of the water in the tanks. It still has some of what appears to be its original corrugated iron cladding and originally it had two clerestory windows to provide interior lighting.

The fish were mostly freshwater species, principally trout and there were the mounted heads of various introduced game animals hanging on the walls. The theme of the whole display was the introduction of animals to New Zealand for hunting and fishing. (There's a rather wonderful photo of the trophy heads mounted on the wall.)

In 1930 the building was taken over by the Otago Lawn Tennis Association which made it into clubrooms and laid courts around it. Some modifications were made but the essential structure remained.

In 1963 brick squash courts were built adjacent to the north wall and in 1989 and 1991 the old part of the building was remodelled with changes to the windows and interior fittings which are what make it seem much younger than it is.

But it is more substantially intact than its unlucky neighbour the art gallery whose south wing has mostly been demolished.

With renovation and restoration the clubrooms would be a more whole and representative example of what was originally built for the exhibition. This was what the architect had in mind when he approached me about Mr Clark's proposal.

With the art gallery, the aquarium is one of the few exhibition buildings worldwide still on their original site.

The owner is the city council. It's a pity a building of heritage significance, in public ownership, is being put at risk when it is sound and still serves a useful purpose.