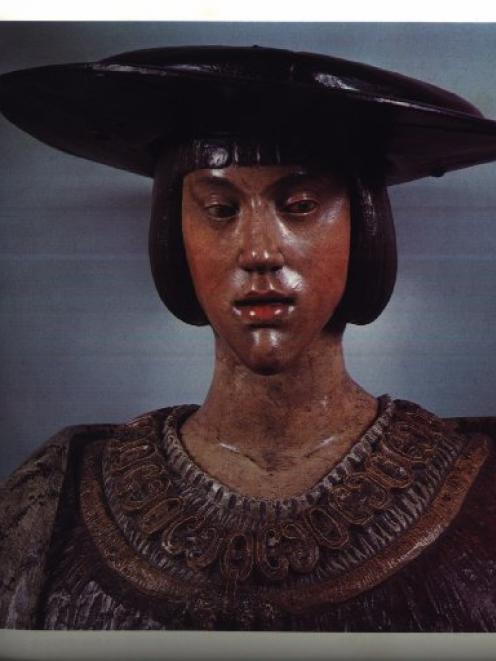 A bust by Conrad Meit made about 1515 or 1516. Photo supplied.
There is a wonderfully expressive ceramic bust at the McDowell gallery in Dowling St which put me in mind of a German work of the Renaissance made in painted terracotta.

The McDowell bust was made by Rob McHaffie (b.1978) a native Melburnian who is still resident there.

The work, which is a combination of porcelain and stoneware, is a diminutive 23cm by 18cm, was made this year and is titled A Little Bit Monica Belluci. Until I received the invitation to the McDowell exhibition I had never heard of Rob McHaffie.

A photograph of this bust was on the invitation and I was struck by it, and reminded of something else. The title of the work didn't mean much to me - who is Monica Bellucci? 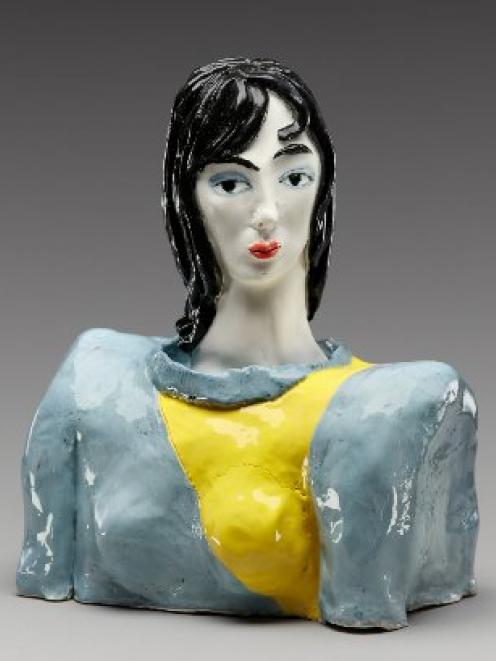 A Little Bit Monica Belluci by Rob McHaffie at the Brett McDowell gallery. Photo by Matthew Stanton.
It turns out she is an Italian film actress, born in 1964 and the McHaffie ceramic has a passing resemblance to her.

The actress has very dark hair as does the ceramic. The ceramic's skin colour is porcelain white while the actress is [sometimes] tanned. Both have prominent cleavages but the bust and the actress share long, high cheek-boned faces, useful for making visually evident unspoken mind-sets.

McHaffie's Monica wears an expression of poignant surprise, not altogether pleasant surprise one supposes. The brows are raised, the lips pursed and the cheeks sucked in.

There's some questioning in the expression and some distaste in the compressed lips. It is very effectively modelled.

What it reminded me of was a north European sculptural tradition of the late Middle Ages or early Renaissance.

The bust is in the Bruges Musee Gruuthuse. It was made by Conrad Meit (1480-1551). He was born in Worms in Germany but died in Antwerp in what is now Belgium.

It is truly astonishing. It doesn't show a valiant knight, or a bearded sage - the sitter doubtless had no beard because he was incapable of growing one.

It shows a sensitive long-faced boy wearing an extraordinary hat with a page boy haircut his mother doubtless approved, with parted lips and hooded eyes wearing an expression of wonder.

The hat is probably just a symbol of his rank and the characteristically extravagant male clothing of the time.

His doublet, or is it a tunic-like shirt beneath one and the apparently heavy linked chain below the collar are similarly just part of what is now very unfamiliar attire.

What is timeless is the expression of this youth reminding us that even adolescent boys can be sensual and sensitive.

Apparently, he was the nephew of Catherine of Aragon, Henry VIII's first wife. Her sister, Joanna the Mad, inherited the throne of Castille from her mother Isabella and married Philip the Fair of Burgundy.

Philip died in 1506 and perhaps following the death of an older brother Charles became Duke himself, as we noted about 1515 or 1516.

His mother probably wasn't really mad but the victim of intrigue between Philip the Fair and her father, Ferdinand of Aragon.

She was confined in 1506 and died aged about 75 in 1555 still effectively imprisoned. Though considered a religious sceptic she was probably just sympathetic to Martin Luther.

Conrad Meit was invited by Lucas Cranach the Elder to work at the court of Wittenberg and was probably in Cranach's workshop from 1505 to 1511.

He worked in stone as well as ceramic and produced some nudes which relied on Albrecht Durer for their anatomy.

He went to Middleburg to work for Philip of Burgundy. He spent most of his career working in the low countries. He made a number of impressive funerary ensembles but unfortunately many have been destroyed.

Even so there are enough of his smaller productions to show the extent of his achievement.

They are expressive, well modelled portraits of what are clearly individuals and a remarkable contrast with the stereotypical images of the late Gothic tradition that they were in the process of superceding.

There are numerous portraits of Charles V in later life which show the familiar, long face but a painted portrait by Bernard Van Orley (b.between 1487 and 1491- 1541) made of him at about the same age as he is in the Meit bust shows a close resemblance.

Indeed they are very similar and one wonders if there hadn't been some cross-pollination.

But although Van Orley is better remembered than Meit the expression on the latter's bust is more exquisite, more delightful. I also wonder if McHaffie had any knowledge of this German/Netherlandish tradition. The exhibition's well worth paying a visit.