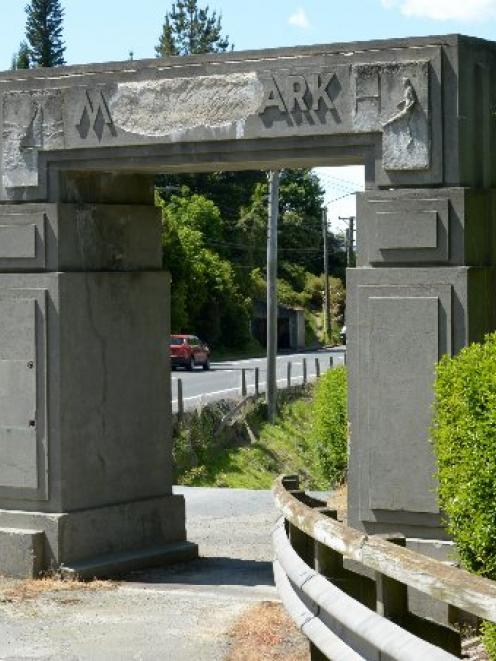 There have been photographs of it in the Otago Daily Times. Built in 1937 to the design of F.J. Williams, a civil engineer, it is made of concrete which has been rendered with cement.

The arch commemorates the services to the community of Mr Hagbarth Ernest Moller (1870-1936), a sometime mayor of the borough of West Harbour, member of the Otago Harbour Board and supporter of various sporting endeavours.

It stands at an angle to one side of state highway 88 and a roadway near it descends to the park it names at a level below the highway. It is large and as the highway has increasingly more traffic you might suppose there had been collisions with it.

Indeed people have expressed concern that it's a traffic hazard (ODT 21.11.15). But, apparently, in recent years there has only been one and that didn't result in a fatality.

What does produce some awkwardness is that the Ravensdown fertiliser works, which lies between Moller Park and the main trunk line, nowadays uses the roadway for its vehicles to gain access to the highway. Some people describe it as ugly and have called for its removal.

Its dilapidation is certainly unsightly and the city council, which owns it, has estimated the cost of repairing it at $16,000.

The arch's pillars have been treated as tapering, rectangular pylons with a longer lower segment topped by a shorter one below the lintel.

The pylon segments have raised, rectangular, unadorned panels intended as a form of decoration, one of them originally bearing the plaque. The low relief human figures and the lettering are on the lintel and the latter is another rectangular slab.

It's all rather massive and, with its cement render grey finish, severe. I can see why some think it unattractive regardless of the dilapidation.

There was a vogue for such things at the time. The Sydney Harbour Bridge's pylons are treated in a way not unlike those of the memorial arch (the bridge was opened in 1932).

If I had to characterise the memorial's style I would call it neo-Ramessid because it resembles some of the structures constructed when the several Pharaohs called Ramesses ruled ancient Egypt.

There is a temple complex at Karnak some elements of which are styled something like the memorial. While the latter may seem austere, there's no denying the impression of strength it conveys.

It is unusual too in that it commemorates an individual. Most of our memorials are war memorials. We have some which commemorate events, such as the Signal Hill monument which marks the centenary of New Zealand becoming a British colony.

But there are few indeed, and especially of this size, which are dedicated to a single person. There's the Cargill Monument in the Exchange, but the one commemorating the Rev Thomas Burns in the Octagon was demolished in the late 1940s.

Because there are divisions in the community over what to do, the city council is seeking opinions by way of a page on its website. That is admirable but the alternatives it offers are rather restricted.

One is to restore the existing memorial arch in situ. Another is to replace it on the same site with a ''smaller concrete plinth''.

A third is to replace it with a new memorial structure, or plinth alongside the Ravensbourne cycle/walkway.

The fourth is to replace the memorial arch with a new memorial structure or plinth in another location in close proximity to Moller Park. (The website spells ''proximity'' ''proximately''. Someone who can spell should check the productions.)

There is no suggestion that any of the proposed new memorials would take the form of an arch.

Because of the awkwardness of egress for the Ravensbourne fertiliser works' vehicles, I think there is some merit in having a new memorial elsewhere.

Because Mr Moller was apparently interested in watersports and had been a member of the harbour board, a location on the cycle/walkway near to Moller Park seems a reasonable choice.

But instead of an undefined ''memorial structure'' or a plinth, why not construct a new memorial archway on the scale of the existing one for the cycle/walkway to pass through? And it wouldn't be too difficult to repeat the Egyptian styling.

The council probably didn't offer such a thing because of the greater expense.

But sometimes it's worth trying a little harder to get a good result. I think it could look rather good.