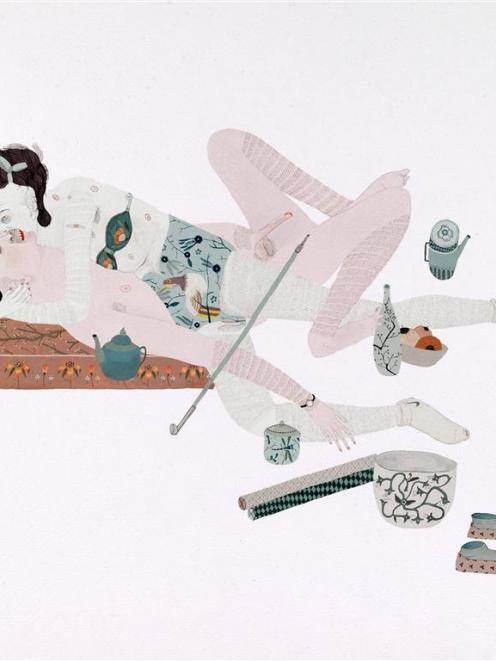 ‘‘Female hungry ghost with dragonfly jar’’, 2009, Gouache and Pencil on Paper, 350mm x 500mm. Image supplied.
Kushana Bush is an interesting local artist. She was born in Dunedin in 1983, the daughter of parents who had migrated from England.

Her father had attended the art school at Winchester but didn't do the degree course because he wasn't happy with the school's focus on minimalist art.

He was a coin collector and had coins emanating from the Kushan or Kushana Empire which had its origins among nomadic people in Bactria, in central Asia, occupying parts of what are now Afghanistan and Tajikistan.

It eventually spread to include the whole of modern Afghanistan and parts of northwest India. From the beginning it was subject to various external cultural influences. It originated in the early Christian era but started to disintegrate in the 4th century.

She has said she remembers practising life drawing alongside her brother after school. Art was was always in her background and when she finished school she entered the Dunedin School of Art. She graduated in 2004.

Early in her time at art school ‘‘there was a dramatic day when a classmate got sent home for painting a huge canvas of an extremely violent sexual image.

''I had read of many artists who had fairly (or often unfairly) had their show shut down, been jailed or were just humiliated for testing the boundaries, but seeing someone in front of you so swiftly exiled really scared me.

Her experience at the art school led her to look more closely at how the eastern artists ‘‘had got away with it''.

''My lecturer Lyn Plummer gave me a video tape to watch of Indian miniaturists working in the painstaking method of gouache on paper, a medium that produces fine lines and rich detail. I was hooked on the miniature method from then on.''

She makes crowd compositions by working them out in advance on layers of tracing paper, because as has been observed, gouache is an unforgiving medium.

They are not large but are not really miniatures. They are very delicately painted in a predominantly muted palette, although the carpets, lutes and other trappings intended to quiet anxiety about their eroticism are often, not only intricately patterned but painted in intense hues.

There is nothing else like them in New Zealand art. Ms Bush's achievement is remarkable.

Her work has been well-received critically both in New Zealand and overseas. In 2011 she was the Frances Hodgkins Fellow.

The Dunedin Public Art Gallery will hold an exhibition of her work in November.