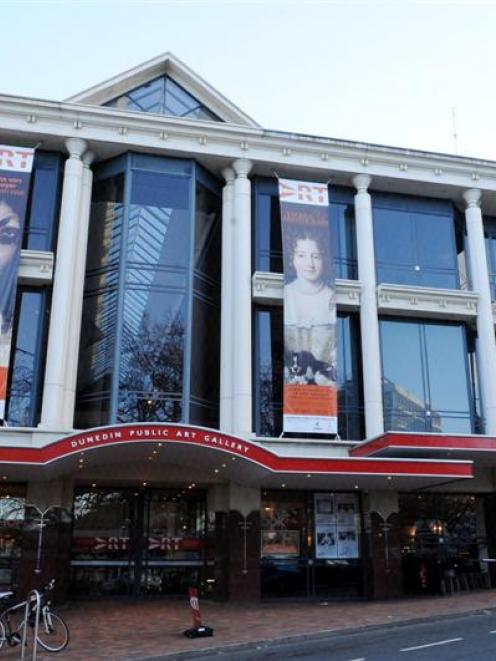 A new strategy makes strong claims for the scale and quality of Dunedin's arts and culture, but such a thing is not easy to measure, the writer argues. Photo by Linda Robertson.
On October 27, the Dunedin City Council's new arts and culture strategy was launched at 8 Stafford St.

The room where we gathered was in the course of renovations. A band was playing at high volume and there was a reasonable attendance, perhaps 50 or more people. I imagine most, like me, had been specifically invited. I recognised quite a few people.

Because the music was very loud we had to converse by shouting so when it stopped, just before speeches began, there was a noisy babel because people hadn't adjusted.

The mayor spoke, as did Cr Aaron Hawkins, who has played a part in making the strategy. In the course of events there were performances including singing and the reading of a poem by its author, this year's Robert Burns Fellow, Louise Wallace.

There was a coloured booklet explaining the strategy. It is called Ara Toi Otepoti, Our Creative Future. It has been quite a time in the making.

The mayor pointed out it is not just an internal council production, as many of the council's plans and policies are, but was jointly undertaken by the council and a body called ''Transforming Dunedin'' with contributions from other bodies and groups such as the university and polytechnic, Te Runanga o Otakou and Kati Huirapa Runaka ki Puketeraki among others.

There have been earlier documents and I have discussed some in this column. They are not very entertaining reading and rely heavily on current administrative jargon.

There's a lot ''leveraging'', ''embedding'', and ''holistic'' approaches already employed and to be adopted. Such terms are widely used in local and central government administrative circles but are opaque to most people. It's a pity they can't be avoided in documents intended for general consumption.

The booklet makes strong claims for the scale and quality of Dunedin's arts and culture, in relation to its population, compared with other New Zealand cities. I generally agree but these things are hard to measure and it helps to be specific.

Things like visitor attendances at places like the public art gallery and dramatic, musical and other performances can be calculated and give some impression and are listed among means for doing so (at p.17).

But residents' opinion surveys, which are also mentioned, are notoriously difficult to evaluate and have produced some very odd results in the past.

The booklet has a lot to say about identity and the role of the arts and culture in forming that. At page 6 it exhorts us to ''Be in Dunedin's distinct culture and creative thinking''.

At page 8 it says ''Dunedin has a distinctive cultural community, physical environment and history''. I find such statements problematic.

Regarding the second, Dunedin certainly does have a distinctive physical environment. It is a place and can be and is defined geographically which can be shown by lines on a map.

There are lesser parts inside it but outside its boundaries there is no other place which shares them. But this is true of every place anywhere. It's not really anything to boast about. The writers perhaps meant to convey that its territory has a distinctive character.

That is so but it's harder to define without making it just one among very, very many. It is coastal and mountainous in parts but then so are numerous other places in New Zealand and around the world. Having a distinctive cultural community again is difficult to define.

The community it speaks of is just a number of people at any given time engaged in creative activities.

Certainly that group isn't the same as the ones in Christchurch and Auckland, but so what? Those communities are also distinctive and identifiable by the same means. It doesn't make Dunedin special.

I don't wish to seem grumpy or hypercritical. My point is it would be better to avoid such apparently empty claims and more cautiously point to something like an unusual or in some way reasonably carefully defined character.

In a similar way, I'm concerned by exhortations like another at page 8 - ''Ensure the best arts and culture from around the world is available on our doorstep''.

Are we to remove Michaelangelo's David from Florence and the Parthenon in Athens and relocate them to Dunedin? I doubt the authors intended that. But there are better things that could be said.

At page 16 we're told what has actually changed.

A new committee has been set up involving not only DCC people but others, including some who will be better informed than most about the arts, and it's to play a part in a wide range of the council's activities, not just the few obviously arts related ones.

If that seems underwhelming I don't know that it really is. It could make a positive difference. I hope it does.