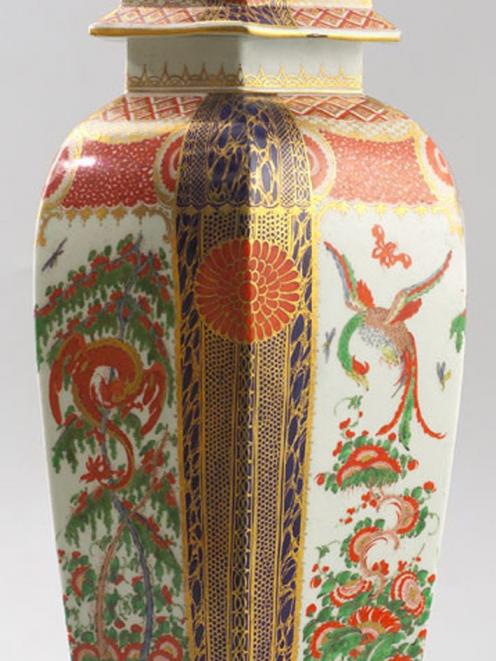 A Dunedin Public Art Gallery lidded vase, made by the Worcester Porcelain Company in England about 1770, with Japanese-style decoration. Photo supplied.
‘‘Japonism'' and ‘‘Chinoiserie'' are names of impulses that had a substantial effect on European art.

‘‘Japonism'' is the English version of the French word Japonisme, coined by Jules Claretie in 1872 and referring to a particular style of art then in vogue.

However, the impulse is considerably older, as illustrated by a vase in the Dunedin Public Art Gallery's collection. (It was taken off display recently but can be seen on the gallery's website and is illustrated in the ‘‘Beloved'' exhibition catalogue at p.72.)

It is a lidded vase made by the Worcester Porcelain Company in England about 1770, is hexagonal and has Japanese-style decoration.

Europeans started trading more regularly with China and Japan during the 16th century and although Japan was closed to all but a very few European merchants, some goods did find their way to the West.

Some of the things that most impressed Europeans among these exotic goods were various pieces of porcelain.

European ceramics were plainer earthenware and, attempting to emulate the hard, translucent and frequently decorated porcelain from the East, the Europeans developed tin glazing, which produced a somewhat similar effect but was not the same.

The French, Germans and English all strove to discover the secret of porcelain. To make it you need a special kind of clay, kaolin.

It needs to be fired at a very high temperature. A Jesuit missionary, long resident in China, published a book in the 17th century detailing some aspects of the process of making it, but not all.

In the early 18th century a German, Ehrenfried Walther von Tschimhaus, developed materials and a process capable of producing a kind of porcelain like one of the Chinese types.

Augustus II the Strong commissioned the building of a kiln at Meissen and von Tschimhaus successfully used it to produce his porcelain for the first time in 1710.

The means of making it were a carefully guarded trade secret. Von Tschimhaus' process was not chemically the same as the Chinese one. The raw material has been called ‘‘hard paste''. It was fired at temperatures up to 1400degC.

Another kind of European porcelain was known as ‘‘soft paste''. It was pioneered in Rouen. The family of Pierre Chicaneau were granted letters patent by Philippe I, Duke of Orleans, because the family had been said to have been producing porcelain as ‘‘perfect as the Chinese'' since 1693.

With this protection, a factory was set up at St Cloud in 1702. The wares were like blue and white ones of the late Ming period but soft-paste porcelain, like the German hard-paste porcelain, is chemically different from the Chinese wares.

In Britain it was not until 1743 that the first porcelain factory was established at Chelsea. In 1745 another was set up at Bow. This also used a kind of soft-paste porcelain developed by its director, Nicholas Sprimont, a silversmith by trade, but little is known about the factory's early history.

Others followed at St James's and Bristol in 1748, Longton Hall in 1750 and Royal Crown Derby in either 1750 or 1757. The Royal Worcester factory was established by the makers of the Dunedin vase in 1751.

This is a luxurious, large, ornamental showpiece. Britain's porcelain production had not come under royal or princely protection. It was developed by enterprising people principally for merchants and the growing middle classes and was utilitarian, intended for domestic use.

Worcester, the pre-eminent maker, was one of the few producing pieces like this, intended for display. (It is 40cm high and 18cm at its widest.) The soapstone-based body is relatively unstable. Many of these slab-sided vases shattered or collapsed in the kiln.

There were genuine Japanese porcelain vases at Hampton Court Palace, first displayed in 1689, and this is inspired by of one of those.

The lid is like the roof of a pagoda and is like the original. There are stylised chrysanthemum flowers at several points on the shoulders, where there are gilded blue ground ribs that are entirely European, according to Peter Wedde, who wrote the erudite note about this in the catalogue.

The type of Japanese porcelain this is emulating is called ‘‘Kakiemon'' in Japan. They were enamelled and were produced from the mid-17th century in Arita, in what is now the Saga Prefecture.

Its productions resemble those of the Chinese ‘‘famille verte'' style. These Japanese wares were highly prized in the West. Since 1971 the handcraft of making them has enjoyed special protection by the Japanese government.

The Dunedin piece has ho-ho birds in polychrome enamel above flowering plants. It has an underglaze blue Chinese-style square seal mark, a clue to its dating.

It was probably one of a pair originally. It was given to the gallery by Lady Hilda Owen in 1966.