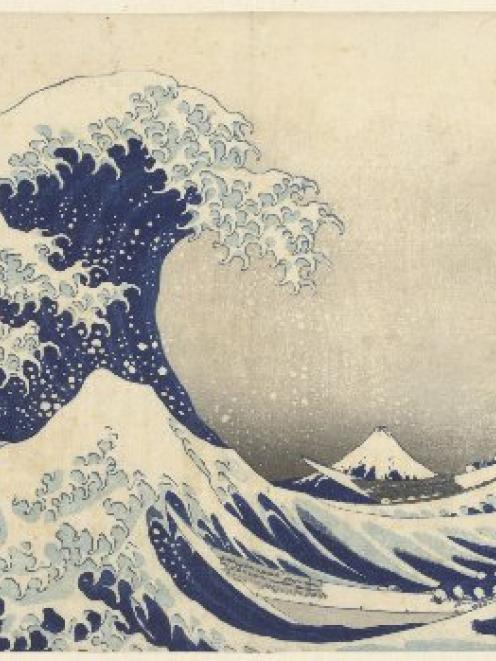 Originally, Hokusai made a set of 36 of these land and seascape images but he later supplemented them with another 10 so the series actually has 46 views.

They are coloured prints made using carved wood blocks, the making of which must have been rather painfully elaborate.

The gallery owns 37 of the 46. It already had some but in 1993 a young man, Andrew Munro, made a gift of a numerous collection of Japanese woodblock prints in memory of his recently deceased father.

This hugely expanded the gallery's holdings and brought the number of the Thirty-six Views... up to the tally it has today.

The whole series is delightful but Under the Wave... has a magnificent, towering surge, foam crested, the foam with stylised claw-like edges threatening peril to three tiny vessels and their human cargo.

Beyond the foam fangs, in the distance and rising to a much lesser height is the perfect cone of Mt Fujiyama, the talisman of the series.

In Hokusai's lifetime Japan was still closed to the outside world as it had been for centuries under the Shoguns' rule.

There were only small enclaves of Dutch and Portuguese traders there. Much oriental art looks very flat because the device of linear perspective was unknown there.

Linear perspective was first developed by the ancient Greeks and the Romans adopted it. Knowledge of it was lost in the Middle Ages - which is why Medieval art seems so flat - but it was rediscovered in the Renaissance.

Hokusai discovered Dutch prints employing the device which he studied and Under the Wave... exhibits his grasp of it, particularly in the way it shows Fujiyama.

The image is still distinctly Japanese, with the stylisation of the foam for example. But this does rather seem like a meeting of Western and Eastern traditions.

Hokusai appears to have been a curious, eccentric character. There is an excellent book Ukiyo-e 250 Years of Japanese Art produced by Roni Neuer, Herbert Libertson and Susugu Yoshida and published in 1978. (I think I'm right in saying there's a copy in the Dunedin Public Library.)

The authors say Hokusai's early works ‘‘suggest he may not have had an inborn talent for painting''.

Little is known about his early life but he said himself he had been in the habit of painting from nature since he was 6.

It is sometimes considered that the genre consists only of woodblock prints but that is not so. There are also Ukiyo-e paintings.

It seems early in his life Hokusai studied wood-block engraving which assisted his later print-making.

When he was about 19 he became a pupil of Katsukawa Shunsho (1726-93). He used the art name Shunro and produced portraits of actors and book illustrations.

In this time he made images in a rather exaggerated perspective and displayed some knowledge of Western art.

When Shunsho died, Hokusai secretly studied under Kano Yusen (1778-1815) which was discovered and led to his being dismissed from the Katsukawa school.

Hokusai then managed to offend Kano Yusen by criticising one of his pictures of children. Yusen dismissed him.

To enlarge his understanding of art, Hokusai studied Chinese Ming and Ch'ing painting and the style of Maruyama Okyo (1733-95), a Japanese who worked in a realistic manner.

In 1795 he changed his art name to Sori - there would be many, many more changes - and as an independent artist started to display real strength.

It has been said that with each name change he tried to change his style as well. As Japanese connoisseurs rather favour consistency this was unlikely to assist his reputation.

To Westerners it sometimes seems admirably innovative. But it is probably the reason Japanese writers and collectors tend to favour Hokusai's younger contemporary, Ando Hiroshige (1797-1858), over him. (The Dunedin gallery also has excellent prints by Hiroshige.)

The name the maker of the Thirty-six Views... used most frequently was ‘‘Hokusai'', the name by which he is now mostly remembered.

Apparently it means the North Star.

Because that heavenly body has been used to steer an independent course when there is not much else to go by, it has been suggested it suits the artist's self-confidence.

The series is rather wonderful and Under the Wave... is truly a gem.