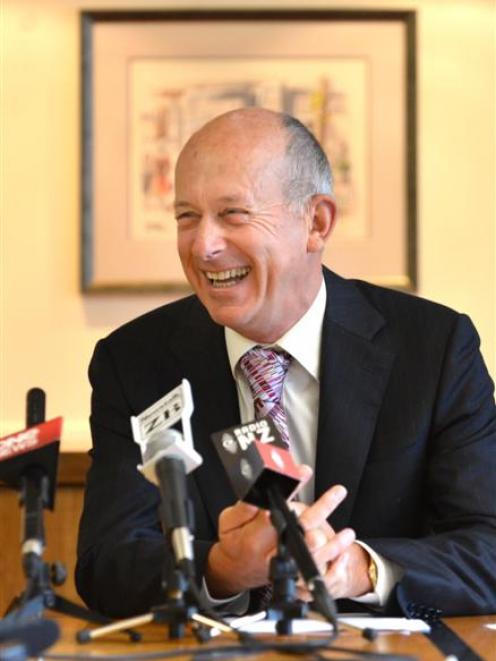 This thought was prompted by various reactions to the release of the city council's Memorandum of Understanding between it and Betterways Ltd, the developers of the proposed hotel and apartment block at 41 Wharf St.

It provides for trying to resolve traffic engineering obstacles, coming to some sort of understanding about improved ''connectivity'' - providing some kind of pedestrian and possibly vehicle crossing of the railway tracks on the line of Rattray St - and then, if these hurdles can be overcome, setting up an urban design panel whose task would be to look at issues such as the building's height and appearance to see if something could be found agreeable to both sides.

The panel would consist of people such as ''academic architectural experts'' (ODT, 11.3.14).

At a televised press conference, the Mayor, Dave Cull, said everything was negotiable including the height and site of the development. Steve Rodgers for Betterways made it clear the company was still only considering 41 Wharf St and while not ruling out some change in height was fairly ambivalent about it.

If agreement is reached, the council might then initiate a plan change so that the rules where the project is sited would fit what was agreed.

It's good to know that they do but some of the comments were worrying. Cr Bezett said it was clear the city needed a five-star hotel but also that a ''clever design'' was needed. Cr Staynes acknowledged height remained an issue unless the new design was an ''iconic'' structure that provided ''a statement on our skyline''.

This is the belief in magic I was talking about.

To see why this is so you have to go back to the crucial concluding paragraph 460 of the commissioners' decision turning down the original proposal.

It says:Our final comment must reflect that, in our opinion, the application as presented to us had a number of shortcomings. Foremost among these was the lack of any compelling landscape evidence that was able to demonstrate that the proposed hotel was an appropriate development at that site, and would not have very long-term adverse visual effects that would change the character of the city.''

It may seem this leaves it open that some other design for a comparable project on the site would not have these adverse effects and I think this is what Crs Bezett and Staynes are supposing. But consider this: 41 Wharf St is very central with respect to the city which grew up at the harbour's head from 1848.

A building of the proposed height - 27 floors above ground - would be very prominently visible in the CBD and from the slopes above it looking out across the old city and from the outer side looking in.

If, as Mr Rodgers has said to me, Betterways needs all or nearly all of the proposed floor space to make the project viable, on that site it is going to have to be something like that height.

But a 28-level apartment/hotel block can only be some sort of slab skyscraper whether of poor or brilliant design. In talking about the city's existing character, the commissioners pointed to the many heritage buildings, particularly in the centre.

While there are some modern high rises, it's the heritage buildings which determine the city's character. They are all examples of revived historic architecture. A modern slab skyscraper can't be that. Any building of that height on that site, suitable for the intended purpose, is going to run into exactly the same obstacle as the original proposal.

I suppose if what was wanted was a church, you could have one with a comparably tall Gothic spire. That might overcome the obstacle but such a form wouldn't accommodate a hotel and apartments.

I think Crs Staynes and Bezett are thinking of cases like the Eiffel Tower and the Sydney Opera House.

The Eiffel Tower is in marked contrast with the Gothic, medieval and often baroque revival buildings around it, was disliked at first, intended to be temporary, won hearts and was retained and is an icon. Similarly, the opera house was controversial, an innovative, stunning design and has become a widely known symbol of Sydney.

The point is, though, our district plan would not allow either of them because each changed the character of the city.

Hence no doubt the suggestion of a plan change. But the decision identified maintaining the city's character as central to the plan and so a change to allow a project similar to the declined one would face the same obstacle. No design wizardry can alter that.