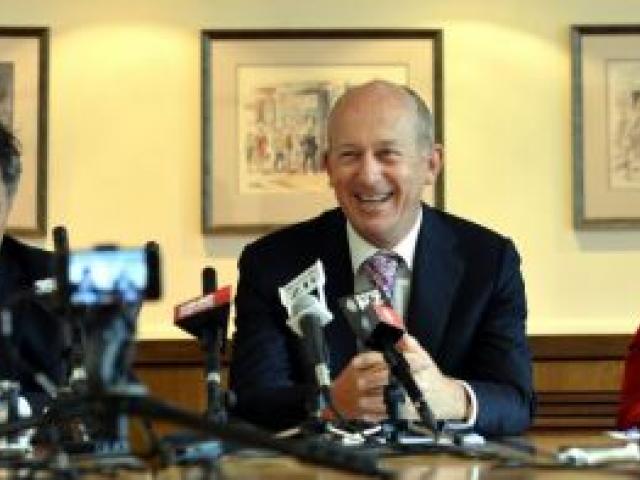 Details of the agreement signed by the Dunedin City Council and Betterways Advisory Ltd are unveiled yesterday by (from left) Dunedin Mayor Dave Cull, Betterways director Steve Rodgers and council chief executive Dr Sue Bidrose. Photo by Peter McIntosh.
A new version of Dunedin's controversial waterfront hotel could be unveiled before the end of the year, after the developer struck a deal with the Dunedin City Council.

However, plans for the five-star hotel and apartment tower will first have to survive the scrutiny of council staff, and receive a tick of approval from a new urban design panel to be formed for the first time in Dunedin.

The project will also need to survive the barbs of opponents, some of whom were quick to reiterate their concerns yesterday.

But, if it does, the council has agreed to initiate a change to its own district plan, prompting a public process that could see the rezoning of the land, easing restrictions and making it easier to build a hotel on the site.

Details of the deal between the Dunedin City Council and the developer, Betterways Advisory Ltd, were unveiled at a packed media conference fronted by Mayor Dave Cull and Betterways director Steve Rodgers yesterday.

Mr Cull confirmed the two sides had signed a memorandum of understanding, spelling out how they would work together to try to address the issues facing the contentious project.

Mr Cull praised the deal as a ''partnership'' between the two sides, who both wanted a five-star hotel in Dunedin, while Mr Rodgers said they were now ''working together as a team''.

''This is important. This would be a major investment for the city and very beneficial,'' Mr Cull said.

All options were on the table as the two sides looked for ways to make the project work, Mr Cull said.

That included the hotel's height and appearance, although Betterways remained firmly fixed on developing its land at 41 Wharf St, Mr Rodgers said.

Asked specifically whether Betterways would accept a reduction in the height of the building, Mr Rodgers would only say that ''everything is on the table and nothing is off''.

''It depends on the design and the look [of the hotel]. That may or may not affect the height.''

He would not speculate on whether a radically altered hotel design might emerge at the other end of the process, but hoped for a ''win-win''.

''I think the outcome will be very positive for the city.''

The agreement announced yesterday also aimed to avoid the need for an expensive Environment Court battle, which Mr Cull said could cost the council up to $300,000.

Betterways appealed last year's decision to decline consent for the hotel, but the court process had remained on hold while Mr Cull and Betterways talked about a possible way forward.

Mr Cull said the deal reached meant council staff would work directly with Betterways to try to resolve traffic and ''connectivity'' issues at the site over the coming weeks.

That included reconsidering the possibility of a pedestrian bridge, crossing the main trunk railway line, to link the hotel site and harbour basin with Queens Gardens and the inner city.

If solutions were agreed by both sides, the project would be referred to a new urban design panel to consider.

The panel would look at broader issues, including the hotel's height and appearance, to see if a compromise could be agreed.

Its membership would be agreed by both sides, but was expected to include academic architectural experts and others with relevant skills, recruited from within Dunedin and nationally, Mr Cull said.

The panel would make a final recommendation to both sides, but each would have to decide themselves whether to accept the findings, Mr Cull said.

That process was expected to be completed before the end of the year, and, if accepted, the council would initiate a plan change to rezone the land, council chief executive Dr Sue Bidrose said.

The plan change process would include public submissions and a hearing, but the zoning change would aim to suit the requirements of the hotel and avoid the need for a fresh resource consent application and hearing afterwards, she said.

It was possible the council could eventually find itself back in the Environment Court, facing an appeal against the plan change, but the process would be more onerous for opponents trying to stop the hotel, Dr Bidrose said.

Unlike the existing appeal, opponents would be on the opposite side of the argument to the council, and would have to do more of the work themselves - and carry more of the cost - rather than simply backing the council's position, she said.

While it was hoped the urban design panel would be able to address most people's concerns, opponents had a ''democratic right'' to object which needed to be respected, she said.

The urban design panel was a new approach in Dunedin, but had been used extensively in Auckland and Wellington with good results, Dr Bidrose said.

She expected the cost to the council would be between $30,000 and $50,000 for members' fees, but this could rise if the council needed help from planning consultants to assess Betterways' proposals.

However, Mr Cull said that would be ''a bargain for both sides'' compared with the cost of an Environment Court appeal.

The approach could also set a precedent for the council and could be used for other investment and development proposals in the city in future, Mr Cull said.

Traffic issues concerning the site would be a ''particularly thorny'' issue to address, which was why it was being done first, before the council committed to the cost of a urban design panel, Dr Bidrose said.

However, Mr Rodgers said the issues were not ''insurmountable by any means'' and had been close to resolution during last year's consent hearing.