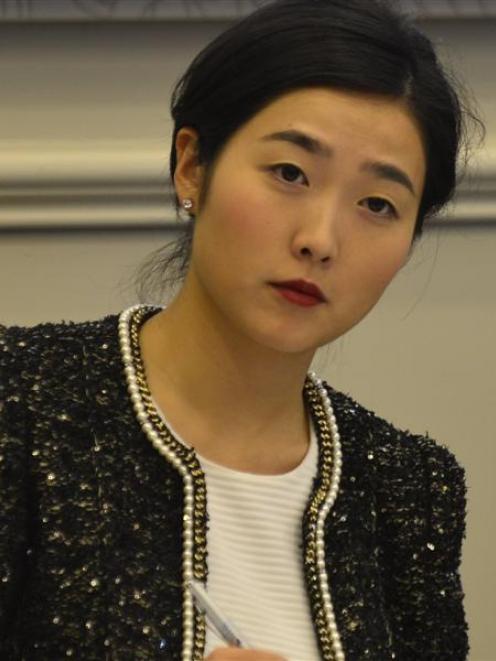 Jing Song. Photo by ODT.
The developer behind Dunedin's $100 million waterfront hotel proposal says interest in another waterfront site is not behind her decision to scrap an agreement with the Dunedin City Council.

However, Jing Song, of Queenstown, is refusing to rule out the move either, as rumours about a switch to the Otago Regional Council's still vacant waterfront site continue to swirl.

Ms Song yesterday confirmed she had ''made an offer'', leading to an earlier meeting with ORC representatives to discuss the regional council's waterfront site, but had heard nothing more.

And, amid the continuing rumours of a change of site, Ms Song would not rule out interest in the ORC's site - first saying she had ''no comment'', but then saying she was ''open to it''.

''We're open to it, but so far I'm not aware that they have actually come up with any solid plans to show us how this would work. There's no real commitment that we can see from them.

''Whether it happens in future or not, we'll see, but we're definitely not thinking about anything at the moment.''

Her comments came as documents released to the Otago Daily Times raised questions about Ms Song's decision to scrap the memorandum of understanding with the council on Monday.

The agreement aimed initially to find solutions to traffic problems posed by a hotel at 41 Wharf St, but Ms Song cited ongoing delays completing the overdue traffic report as her reason for pulling out.

However, a report by Octa Associates, released yesterday, outlined work by consultant traffic engineers at a March 17 workshop and showed five potential traffic solutions had been assessed.

Ms Song confirmed yesterday she was aware of the options, having been briefed by her consultant after the meeting, and believed three - including a new intersection built near the hotel - were ''workable''.

However, after three years' work and a bill of more than $1 million, Ms Song defended the decision to quit the agreement as the release of the final report approached, saying the move was ''not strange''.

''How do you expect to work in a business with your partner or someone like that? The confidence and the trust has been destroyed completely.''

The decision to quit the agreement was also questioned by Mayor Dave Cull on Monday when he accused Ms Song of ''abrogating this agreement on a pretext''.

He would not be drawn on her motives, but the ODT reported last month Betterways Advisory Ltd - of which Ms Song is a director - had met ORC representatives to discuss the council's waterfront site, which was zoned for hotel use.

ORC chairman Stephen Woodhead last month confirmed the council would decide later this year whether to press ahead with its waterfront headquarters or sell the site.

Whether a sale to Betterways could occur ''will be a question that may arise depending on where their process with the [DCC], and the MOU, ends up'', he said at the time.

Yesterday, he said there had been ''no formal contact'' with Betterways since the earlier meeting, and the ORC was yet to consider the site's future.

He could not say whether the cancellation of Betterways' agreement with the city council changed proposals for the site, but there were no plans to meet Betterways' representatives.

That included building a new signal-controlled intersection where Wharf, Thomas Burns and Fryatt Sts met, or realigning the Jetty St overbridge off-ramp, both of which were considered problematic.

Other options ruled out at earlier stages included building a vehicle tunnel under railway land in the area, linking the hotel and Rattray St, which was deemed too expensive, the Octa report showed.

However, Ms Song said yesterday the options being discussed showed claims traffic problems at the site were ''insurmountable'' were ''just not true''.

''There are ... potential solutions that could work,'' she said.

Council infrastructure and networks general manager Tony Avery said it was true the Octa report had identified options that ''potentially were workable'', as well as risks, but that was not the end of the process.

The report was to feed into the final traffic report, which Ms Song had been waiting for, but that had not been completed, he said.

''What [Octa] have identified are options ... the full impacts of those options on traffic flows and entry into and out of the hotel and things, still needed to be judged by Betterways and the council, and that hadn't happened.

''You've got a distinction between technically feasible options and whether those options and their implications would be acceptable.''

Mr Avery would not speculate on the reasons for Ms Song's decision to quit the agreement, but said it had left council staff ''surprised and disappointed''.

''We thought we were making progress.''