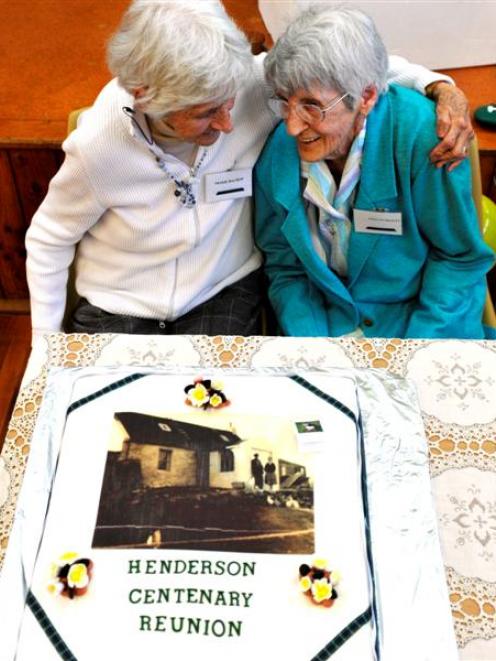 Nessie Bachop (85) and Evelyn Bezett (88) at the Henderson family reunion at Wingatui Hall on Saturday. Photo by Craig Baxter.
More than 100 Henderson descendants celebrated the family's arrival in Dunedin a century ago on Saturday.

William Robert Henderson and his wife Nicolson (nee Priest) arrived in Dunedin on January 10, 1914, from the Shetland Islands. They died in Dunedin, a month apart, in 1952.

More than a quarter of their 400 descendants gathered at Wingatui Hall to catch up and reminisce at the weekend.

''It's been nerve-racking. There are so many people here I don't know,'' the oldest descendant present, Evelyn Bezett (88), of Dunedin, said on Saturday.

The oldest family descendant, Barbara Hall (92), was unable to travel from Tauranga for the reunion.

The descendants pored over old family photographs and documents and visited the grave of their forebears at Andersons Bay Cemetery on Saturday.

A ''Hendersons Have Talent'' show was also held on Saturday night. The reunion concluded with a barbecue yesterday.