From hippie to courtroom warrior 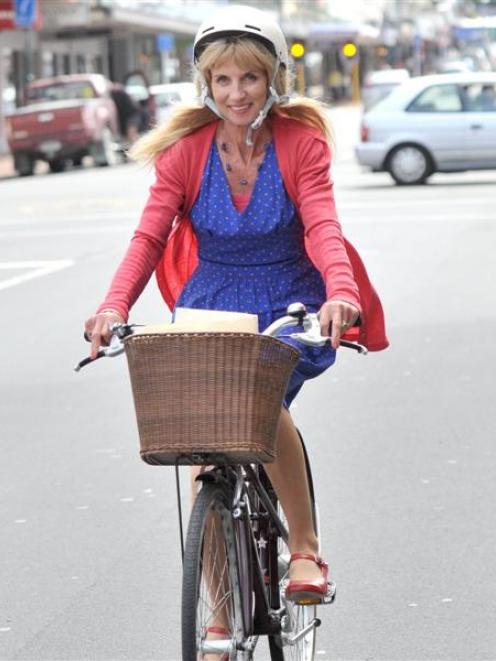 Barrister Anne Stevens cycles down Stuart St, Dunedin, this week on her way to court. Photo by Linda Robertson.
The men and woman she fights for have been accused of sometimes horrific crimes, yet after three decades of practice, Dunedin barrister Anne Stevens still sees ''fellow souls'' in those she represents. David Loughrey talked to the former Takaka hippie whose fierce cross-examinations make her one of the city's more formidable advocates.

As Dunedin barrister Anne Stevens tells it, the human weakness in us all means one day, any of us could be standing accused in the dock.

Even if her clients are guilty, they are, she says ''just fellow souls like us, and there but for the grace of God go all of us''.

''Some people would think not, but actually human weaknesses come in so many forms.

Watching Mrs Stevens launch into a cross-examination can be both exhilarating and cringe-worthy - particularly when less-than-truthful witnesses begin to find themselves in an indefensible position.

In a recent murder trial at the High Court, her black court gown wrapping her in the cloak of the justice system, she tore into witnesses on behalf of her client, dragged their inconsistencies to light, and demanded they admit they were lying.

And she does all that for people many would consider unworthy of a second's effort.

It is a question she says she is often asked - how she can fight for someone who is ''guilty''?

''We don't make that decision about the guilt.

''Our function is to represent people to ensure they are treated fairly, just as you and I would want to be treated.

''You're going to fight their battle for them... that's what we do, that's our undertaking.

That advocacy role is something the former New Zealand Law Society vice-president is clearly passionate about, although there are good days and bad.

''On the other hand, some of them do get you down a bit,'' she says, laughing.

She has defended people accused of shooting others, beating people to death, attacking their partner with an axe, even murdering their children or their wife.

Surely that can get you down?

''I don't know that it's depressing. It's just overwhelming sometimes how awful people can be to other people.

''But they nearly always - in fact I would say in every case - they have another side.

• Anne Stevens is not one-dimensional.

She was born in 1953 and was originally from Havelock North; her parents were both general practitioners.

When she was 7, the family sailed to England for her father to study pathology, but the World War 2 veteran died at the end of his three years of study.

Her mother, now a widow with three children, returned home to work as a medical officer at the Royal New Zealand Air Force base at Woodbourne.

The family moved to the Wigram base, and after secondary school in Christchurch, Mrs Stevens went to the University of Canterbury and completed a BA in sociology, then a diploma in teaching, finding work at Sydenham School.

That was in the mid-1970s, and the influences of the hippie generation were definitely a factor in what she did next.

''Oh yeah. We [she, her husband and young family] sold our house in Christchurch and became hippies in Takaka - I wore full-length floral skirts for several years, and lots of beads, and there was quite a bit of alternative culture participation.

The family moved to Dunedin, where in 1981 she had her own brush with the law while protesting the Springbok tour, getting arrested sitting in the middle of Pitt, London and George Sts.

''We all got arrested, and I was breast-feeding [second daughter] Adele. It went way past her bedtime - I told them I've got to go, so they let me go.

''I was never charged.

''It was so good fighting those battles, and most of them we won in some way or t'other.

''It was quite invigorating.

• Anne Stevens must be one of few vicar's wardens in the Anglican Church - in her case All Saints' Church in North Dunedin - who does not believe in God.

''I read the Imitation of Christ [a Catholic devotional book, written in Latin by Thomas à Kempis in the 15th century] when I was about 13 years old.

''How ridiculous is that?''Her connection with All Saints' went back to her time as a law student in Dunedin in the 1980s.

''I was separating [from her husband] and I had two children.''

She wrote to Dunedin Labour MP Stan Rodger to find out if grants were available, and was told All Saints' had a trust fund, which she applied for and got.

''And I thought, well, I better, as a courtesy, go to church.

''I sort of stuck around, and I'm actually not that Christian.''

Does she believe in God?

''No. Some guy sitting up there? No. Who created the earth? No.

''It's just the community thing is really good.

''Anglicans are just sophisticated humanists - we are.''

• Mrs Stevens, now married to Robbie Stevens and with three daughters, graduated in 1987 and started work as an employed barrister in 1988.

But truth was relative.

''Everybody's got their own world view, and what actually happened is usually relative to someone's position in relation to the event, and that can both be psychological and physical position.

''You very rarely get the same two accounts of one event.

''The permutations are endless and, of course, how they're interpreted is endless. So I used to think there was the truth, but there is not one truth."

In court: ''It's whether the evidence proves it beyond reasonable doubt.''

To advocate for her clients meant cross-examination she agreed could have a theatrical aspect, though not everyone got the same treatment.

''I cross-examine a young person quite differently to someone I think is a liar. They get the treatment they deserve.''

Cross-examination and closing addresses were the part of her job she enjoyed most, ''because you're really being an advocate - you're really fighting your patch for your client''.

Mrs Stevens says she plans to continue doing just that.

''I don't want another role in the law.

''I've never applied to be a judge, and I never will.

• Mrs Stevens helped start the Otago branch of the Howard League for Penal Reform in 2009, is still on the committee and has strong views on New Zealand's propensity to lock people up.

She also has strong views on one law that results in people ending up in prison.

New Zealand, she says, is ''crazy about imprisoning people''.

''We're higher than any European country by head of population.

''A better justice system would use more sentences with partial restrictions of liberty, like home detention, and more rehabilitative programmes.

''They're much cheaper, of course.

For those initiatives to be successful, ''you've got to work at it, you can't just give it one go''.

''The hypocrisy of our society; I mean, we lost the war on drugs years ago.

''And what a waste of money that there's helicopters out there looking for cannabis patches when I've never heard of anyone committing an act of violence on cannabis, and yet we spend so much time and energy pursuing cannabis users, and locking them up - locking them up in prison!

''How ridiculous is that?

''It's a no-brainer that alcohol is the drug.''