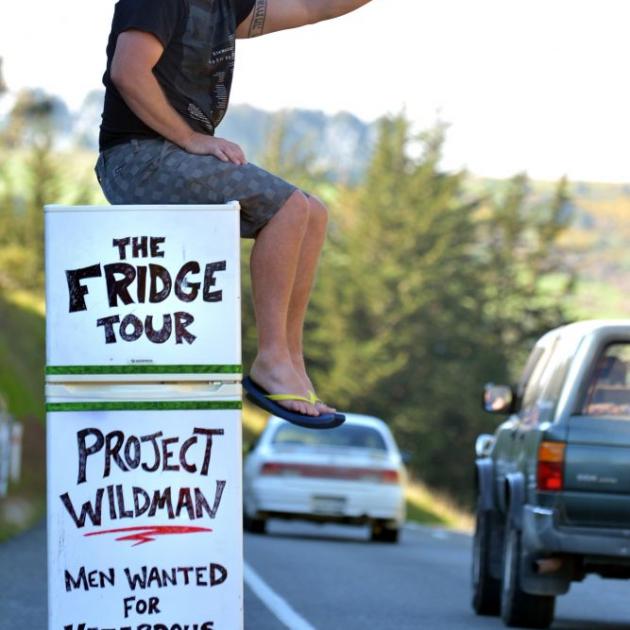 ''A couple of cockies picked me up in Invercargill and said, `If you start spouting Jesus at us you're back out on the road.' Then they handed me a bottle of Speight's.

''But most people have just laughed. The fridge doesn't put many people off picking me up. It fits in a stationwagon, ute or people mover. But even if someone's going past in a Mini, I'll still put my thumb out, for a laugh,'' he said.

''It's a Simpson, made in Australia, though, unfortunately - it probably wasn't the best choice for a New Zealand tour.''

''It's about my experience of manhood and what it means to be a man. Kiwi men hide behind masks. New Zealand is a desert full of masked men bumping into each other and pretending not to be lost.''

Mr Cope has a daughter and two sons under 10. They provided the inspiration for his journey.

''I want my sons to have something better than I did. Our model of manhood is broken and we need to fix it. It has led many of us to anger, depression, anxiety, broken marriages and strained relationships with fathers we barely know.''

''We just sit around a campfire and take our masks off and talk about man stuff.''

He set off from Wellington on November 1, travelling down the West Coast to Invercargill, before arriving in Dunedin at 2.30pm yesterday.

Mr Cope and his fridge leave Dunedin on Saturday and hope to be in Wellington by the end of next week. They then plan to hitch through the North Island.