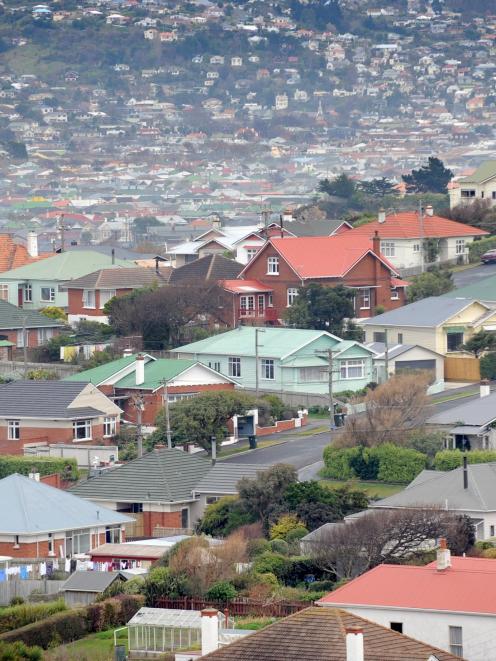 Buyers are playing a waiting game, despite declines in house prices and suggestions homes are more affordable. Photo by Stephen Jaquiery.
Potential home buyers in Otago are not yet leaping back into the real estate market, despite declines in both house prices and interest rates and suggestions homes are becoming more affordable.

Brian Greer, of Dunedin-based Kiwi Mortgage Market Ltd, said this week it was too early to see an impact from the reduced rates, and buyers were still playing a waiting game "to some extent".

However, he considered the Reserve Bank's 1% rate cut would give buyers more confidence.

"I think now the only question in the back of their minds - have we hit bottom? Is this bottom? And I'm not sure anyone knows the answer."

Mr Greer said he was not sure if houses prices had "come back sufficiently to make a substantial difference yet".

Kiwi Mortgage had 15% of the New Zealand mortgage market, with 140 brokers across the country.

"People place such a huge amount of credence on what they read in the paper and listen to on TV and if they hear that the market's got a way to go, they sit on their hands. If the media starts to indicate it's hit bottom, then they say 'Goodness me, it's hit bottom. We're good to go'."

"I hear people saying property's going to drop 30%. I don't believe them. What are they basing that on? I don't think they've got a clue."

Mr Johnston said he believed the Dunedin market had stabilised after a "slight correction".

"If somebody really wants to sell, then there is, in most cases, a buyer out there at a fair and reasonable price. It is back 10%-15% on what it would have been but that is still well ahead of what it was three to four years ago."

"From a home purchase point of view, yes, it certainly is a better time to buy."

But he considered potential buyers were still looking for confidence.

"Whenever we've got this constant talk about recession and unemployment, any decrease in interest rates and house prices is offset to a certain extent by that."

He believes the drop in interest rates will provide a "breather" to people struggling with high repayments.

"So that will mean there won't be so many properties having to be sold. If that happens, then we'll start seeing a decline in the fall in prices."

The group with the biggest problem were the 130,000 people in the "negative equity trap", who had bought property with mortgages of 80% and found now their property was worth less than the amount they owed.

He considered this was an issue in "higher value" markets such as Auckland and Queenstown, rather than Dunedin.

"The Queenstown market certainly came to a shuddering halt, rather than a slow down. I think some of those properties in that area are difficult to move at the moment.

"We've still got a reasonably strong domestic demand but when you are relying on overseas buyers, those markets, like the apartment market in Auckland, and holiday homes, have really been hit hard."

He believes increased attendance at open homes will be a sign that a turn-around in the real estate market is imminent.

Real estate agents report attendance at Labour Day open homes was "on the quiet side", but that was traditional for Dunedin.

Prof Eves said "cashed up" buyers were in the "box seat" at the moment.

"They know that the longer that places aren't moving quickly, the chances are if they sit back it'll drop down again in price."

Buyers were being very cautious and "cagey".

"But the vendors can't really complain, because when the market was on the up they certainly took advantage of that, so I guess it's just spun around 180 degrees, so that the buyers are now the ones with the power."