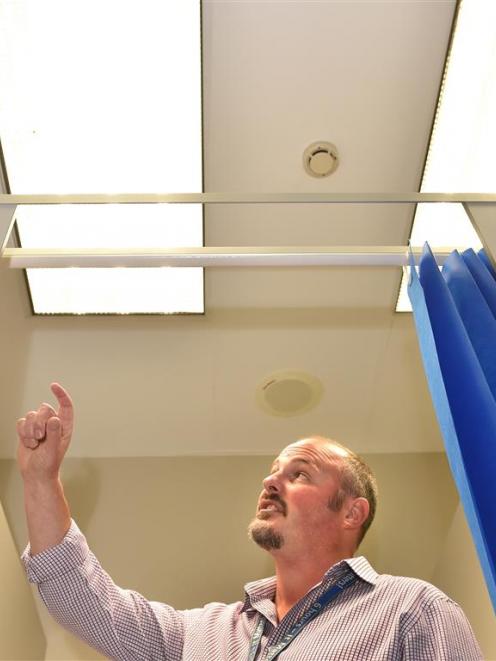 Facilities and site development manager Warren Taylor points to a retrofitted ceiling in the radiology changing rooms. The product was fitted in this area early because it was undergoing other alterations. PHOTOS: PETER MCINTOSH
The Dunedin Hospital asbestos clean-up has now cost more than $1.3 million, it has been confirmed.

The new figure was released yesterday after the Southern District Health Board released documents under the Official Information Act showing an estimate last November put the potential cost at $14.6 million.

Of that, $10 million was for removing it from ceilings in the clinical services building, but the board subsequently decided on the much cheaper option of containment.

Released after a complaint to the Office of the Ombudsman, the papers show the "downside'' of the cheap option is that basic maintenance, like changing a light fitting, will be difficult and time consuming.

"The area requiring work will need to be completely isolated, cleaned, tested, the works undertaken, and retested prior to reoccupation.

"This will severely restrict any improvement work to facilities and IT in the clinical services building,'' the internal paper says. 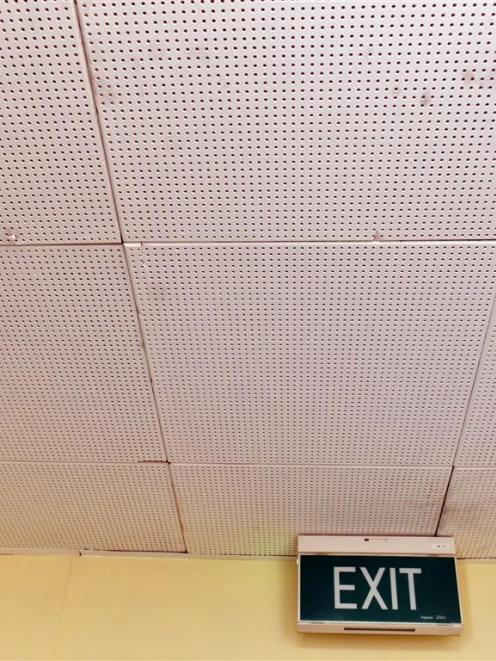 A ceiling area in the clinical services building in its original state.
The building has to last up to 10 years before it is rebuilt.

Last October, the board closed some clinical areas for urgent cleaning after white asbestos fibres were found. After dealing with the immediate safety issue, it then had to come up with a plan and costings to deal with the asbestos problem.

The papers show the board wants the University of Otago to share the cost of dealing with asbestos in the lecture theatre building.

Removing asbestos from ceilings was impractical, as well as expensive, as it would mean closing clinical areas.

"When we started looking at that, there's no way that we would be able to physically do that. We didn't have another clinical services building to relocate all the clinical activity into.''

The work involves retrofitting a fibre product, and was scheduled to start last night.

Only ceiling areas still in their original state need the treatment, which is about half the building.

"While we've got to make sure 100% the building's safe to be occupied . . . we also don't want to be wasting money on a building that's not going to be there for a long period,'' Mr Taylor said.

In that area, the asbestos could be removed, as the building had a longer life span. A working group has been formed with the university to consider options.

Lifts in the clinical services building that had been closed since last October should reopen this month, he said.

The board released the documents after reconsidering its decision when the Office of the Ombudsman launched an investigation into the decision to withhold them.

The DHB responded in early December saying it was withholding five documents to enable "free and frank'' expression of views. It has now released four of them, and is holding on to a fifth document, on asbestos management policy, saying it has not been finalised.