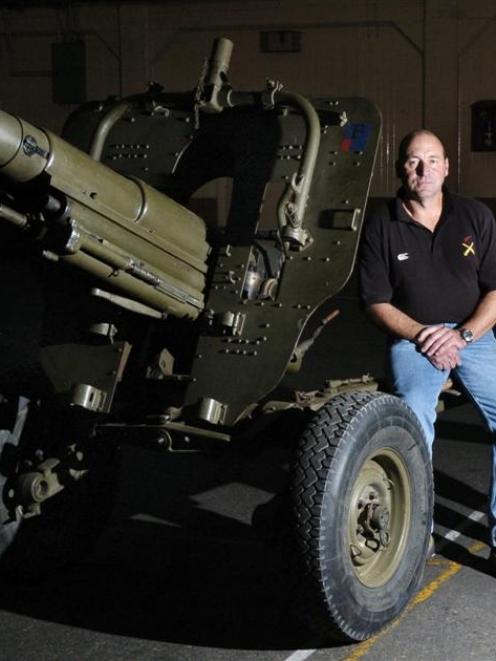 The great awakener . . . Former gunners from Dunedin's 31(B) Battery Royal NZ Artillery, Warrant Officer Class 1 Paul Galloway and Allan Ridley, a former sergeant with the battery, with the Italian 105mm Pack Howitzer they have loaned from a private collector. Photo by Gerard O'Brien
Frosts and temperatures below 4degC across Otago are forecast for Anzac Day, but it will not keep veterans from attending.

In Dunedin, there will be something different for those who do venture out, to see - or more likely hear - the return of the traditional dawn parade field gun.

Veteran and immediate pastpresident of the Dunedin RSA Fred Daniel said it would take more than a bit of frost to stop veterans attending what was for them one the most personal occasions of the year.

‘‘They'll front. They're committed. For them it would be like letting the team down [if they did not go].''

This year, two blanks will be fired from an 105mm Italian L5 Pack Howitzer, replacing the Robbie Burns Cannon which was brought into action for Dunedin's dawn parade when the 31(B) Battery Royal NZ Artillery based in the city was disbanded in 1999, taking with it the M1O1A1 American Howitzer traditionally used during the service.

Warrant Officer Class 1 Paul Galloway, of Dunedin, said the Gunners Association, a group of former gunners with the 31(B) Battery, had the idea to borrow the field gun for Anzac Day.

The group met once a month and fired the Italian Howitzer once a year at a gathering on Gunner's Day on May 28.

The gun, which was used by New Zealand troops in Vietnam, belonged to Waimate military paraphernalia collector Murray Dempster, who had agreed to lend it to the group for Dunedin's dawn service parade this year.

The gun was more appropriate to the service than the cannon and dealt better with the challenges of Dunedin weather, WO1 Galloway said. The weather forecast for the day should not bother the gunners. MetService meteorologists are forecasting a fine day after a frosty start in many South Island places.

The coldest towns were expected to be Queenstown and Wanaka where the air temperature might reach 0degC. Dunedin dawn service convener Lox Kellas, of the Dunedin RSA, said preparations for this year's Anzac Day commemorations had gone smoothly.

He expected the usual crowd at the 6.15am dawn service in Queens Gardens - more than 5000 people have attended services in recent years - and also anticipated big crowds later at the poppy-laying service at Ander sons Bay Soldiers Cemetery, the civic service at St Paul's Cathedral and the raising of the flag at Montecillo Vet erans Home and Hospital.