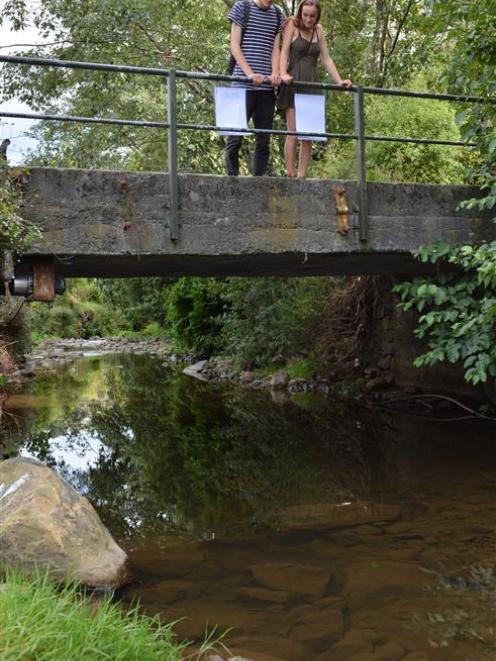 Mica Goldsmith and Emma O’Malley, both of Dunedin, pause while enjoying the ‘‘Creekfest — Love the Lindsay’’ event in North Dunedin. PHOTO: GERARD O’BRIEN
There was a lot of love for the Lindsay in Dunedin at the weekend.

Members of the public were out in force to support Sunday's inaugural ‘‘Creekfest - Love the Lindsay'' event in Northeast Valley.

Dozens of people took the chance to take a 1km guided stroll along the Lindsay Creek to Chingford Park, where they joined hundreds of people enjoying games, workshops and live music.

Event co-organiser Steve Tripp said the event aimed to raise awareness of the creek and encourage people to look after it.

If people were more aware of the creek, which meanders along behind houses in North Dunedin, they would be more inclined to take care of it, Dr Tripp said.

The creek was home to trout, longfin eels and freshwater crayfish, but also boasted a ‘‘highish'' bacteria count, indicating ‘‘the balance is out of whack'', he said.

The initiative was supported by community volunteers and members of the Valley Project, which also aimed to raise awareness of Northeast Valley's offerings and build community ties, he said.