Hundreds turn out for Hillside 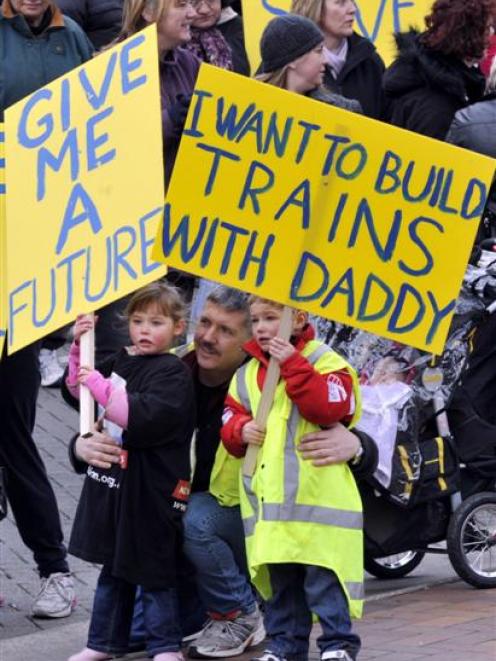 Hillside boilermaker Stuart Johnstone and twins Skye and Kane get their message across in the Octagon on Saturday. Photo by Gerard O'Brien.
Songs and shouts of protest, led by Dunedin Mayor Dave Cull, have delivered a strong message to KiwiRail and the Government to save 40 jobs threatened at Hillside Engineering.

Rallying cries came as a large crowd gathered in the Octagon for the Save Hillside demonstration on Saturday afternoon.

Mr Cull did not hold back, criticising the threat to Hillside jobs as "short-sighted, simplistic and destructive".

He told the crowd the protest was not simply about the loss of 40 jobs, others that might follow, or the "economic calamity" faced by Dunedin if Hillside was lost. It was not even just about encouraging KiwiRail to pay a little more to source its carriages from a New Zealand producer such as Hillside, he said.

"This issue here is about the sum total of all those things, and much much more." He urged the Government to adopt a policy supporting businesses and communities within New Zealand, ensuring skills were not lost and communities continued to function.

The benefits would be felt across the country, he believed.

"Communities need to work, in both senses of the word."

The Government's focus seemed, over the last two decades, to have been on workers making dairy products "and coffee for tourists".

"I think some of us want a few more choices." The Save Hillside campaign was launched after KiwiRail's proposal to cut 70 jobs, including 40 from Hillside in Dunedin.

KiwiRail bosses were due to begin final deliberations, deciding which Hillside jobs were likely to go, after a consultation period with employees and union delegates closed on Friday.

The Otago Daily Times counted between 700 and 1000 people, including Hillside workers, union representatives, politicians and the public, who braved cold conditions for the rally; while organisers put the figure at 2000.

Many present waved placards with messages such as "Please listen" and "Keep Kiwis working". Five-year-old Kane Johnstone, struggling to hold his placard up, had a simple message. "I want to build trains with Daddy", his sign read.

Retired engineer Lex Smith (83), a worker at Hillside for 11 years, told the crowd, "Once we have lost these skills we have no ability to get them back again."

Otago Chamber of Commerce president Peter McIntyre said the threat was not just to Hillside jobs, but about 120 other job losses that would follow.

"We cannot afford this to happen," he said.

Karen Dehn, of Dunedin, believed KiwiRail or the Government would be forced to listen "because Dunedin's united".

"They have to listen." Organiser John Kerr, of the Rail and Maritime Transport Union, said he was "delighted" by the turnout, and was "daring to hope" the jobs might yet be saved.