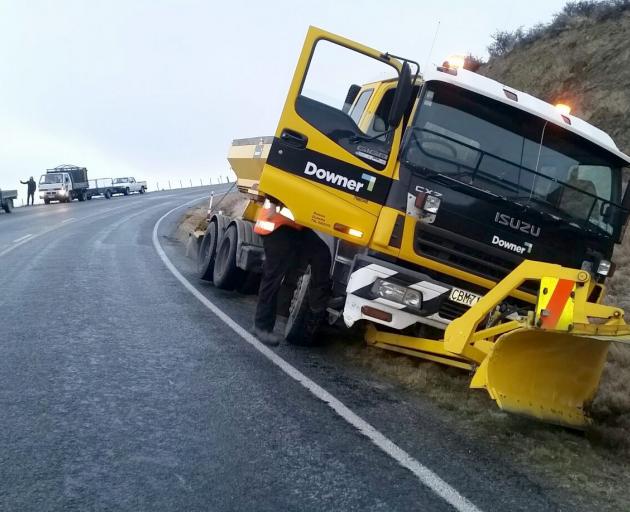 A Downer grit truck sits in a ditch on State Highway 87 between Outram and Sutton yesterday. PHOTO: ANTHONY WALTERS
Freezing  temperatures on the Taieri transformed a stretch of highway into a skating rink yesterday morning, creating black ice, putting a grit truck in a ditch and forcing a road closure.

Allied Press publisher's assistant Anthony Walters has been driving between Outram and Middlemarch to deliver the Otago Daily Times for 15 years.

The ``horrendous'' black ice on State Highway 87 between Lee Stream and Middlemarch was the worst he had seen.

The road was as slippery as a skating rink, he said.

The wheels on his van were ``spinning'' constantly to cover the 40km stretch of highway.

Motorists were travelling at 5kmh uphill and 2kmh downhill to ``dance'' across the black ice.

He started his return journey at 7.30am, expecting contractors to have laid grit.

But the grit truck slid on ice and ended up in a ditch about 7.45am.

The truck driver was uninjured and the road was closed, he said.

The section of SH87 between Sutton and Outram was closed between 7.48am and 11.22am yesterday.

driver was gritting the ``iced highway'' at the time of the crash.

A farmer with a 4WD tractor came to the driver's aid and also slid on the ice.

``The incident reflects the treacherous conditions encountered and illustrates why the agency closed the road to motorists until the route had been treated and made safe.''

The female driver of a vehicle that hit a van after ``spinning'' across black ice in the Cromwell Gorge yesterday morning was airlifted to Dunedin Hospital with moderate injuries.

Sergeant Bruce Terry said the head-on crash happened near Champagne Gully, 8km from Cromwell, about 6.30am.

The Cromwell woman's Hyundai hit the wire barrier around Lake Dunstan and the fence on the other side of the road before colliding with a Ford van, carrying shearers who were heading to work, he said.

``People were caught out by the ice as it was 1 or 2 degrees in Cromwell but then the Cromwell and Kawarau Gorge had black ice.

``It was so slippery at the accident site you could hardly stand up on it.''

St John spokesman Ian Henderson said a woman in her 20s was transported by ambulance to Dunstan Hospital with moderate injuries after the crash.

Sgt Terry said the woman was later transferred to Dunedin Hospital. Nobody else was injured.

No details about the injured woman's condition were available last night.

There were several ``close calls'' around Central Otago roads because of black ice.

A black ice warning was in place for SH6 yesterday between Kawarau Falls and Lumsden.

The cold temperatures were forecast to continue this week, Mr Duncan said.

Motorists needed to ask themselves if they really need to travel in the early morning and if the trip could be postponed until the sun was out and the road was warmer, he said.

If the trip had to be made, motorists should drive to the conditions and plan to set aside extra time for the journey to avoid rushing.

Motorists travelling through remote areas should be prepared and carry food, blankets and a phone charger.

``We encourage all drivers to take extreme care in places like SH87 as well as other parts of the network most affected by the significant ice and wind-chill factor.''

Friday would be windier, cloudier, with a greater chance of showers and ``slightly warmer'' temperatures, he said.