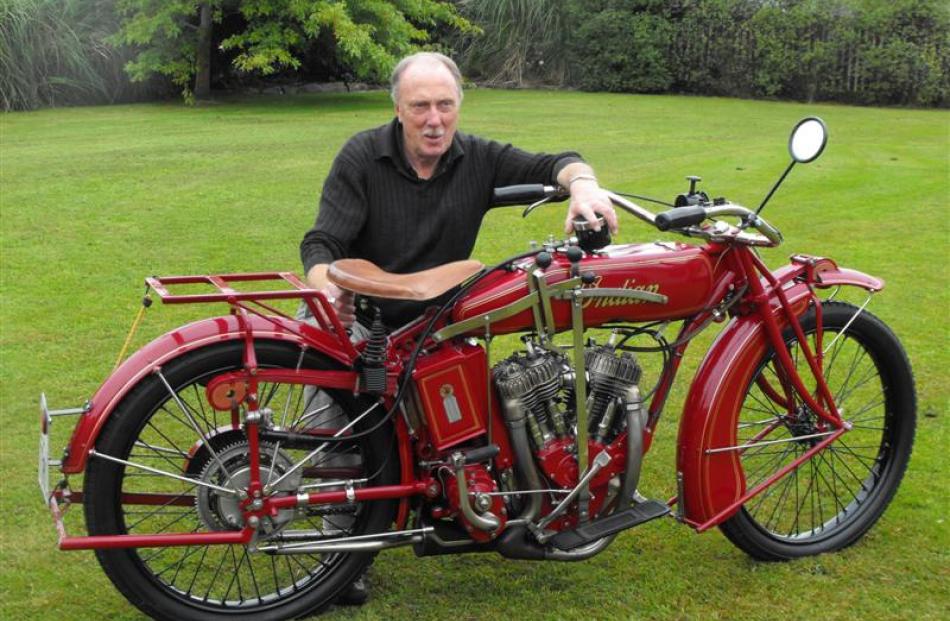 Bill Veitch, of Mosgiel, with his 1920 Indian Powerplus motorcycle before the 21st rally of the Indian Owners Register, which will be in Dunedin this weekend. Photo by Olivia Caldwell.

Dunedin residents will get the rare chance to see Indian motorcycles this weekend when the Indian Owners Register celebrates 21 years of its annual motorcycle rally.

Indian motorcycles were produced in the US between 1901 and 1953.

Today, 40 members of the Indian Owners Register of New Zealand will cruise Dunedin streets together.

The annual rally of the Indian Owners Register is held in the South Island every two years.

Next year it will be in Hamilton, then in Cromwell in 2014.

Club member and Dunedin rally organiser Bill Veitch said this was a good chance to see Indian motorcycles in numbers.

The best time to catch a glimpse of the motorcycles would be about 10.30am at the St Clair Esplanade when the riders would stop for morning tea, Mr Veitch said.

The 130km rally would end at the Taieri Historical Park at Outram.

During World War 2, about 5000 Indian motorcycles were sold to New Zealanders, for about 130 each.

"They are heavy and cumbersome bikes to ride, but they're nice bikes to own," Mr Veitch said.

The oldest bike on this weekend's rally, a 1918 Indian, is owned by Ross Pringle, of Milton.