Irish solo-sailor has what it takes to finish the job 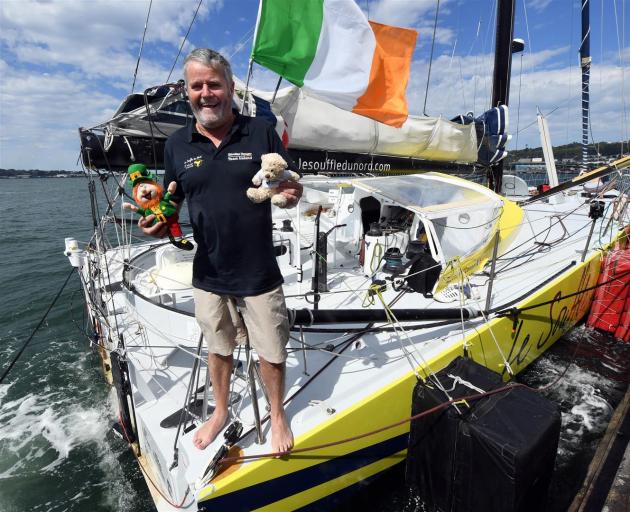 A year after he was towed into the city with a broken mast, Irish solo-sailor Enda O'Coineen is preparing to leave Dunedin on Friday on a two-month journey to France. Photo: Stephen Jaquiery
You need to be scared and slightly crazy to even contemplate sailing half way around the world by yourself.

That is the advice from Irish solo-sailor Enda O'Coineen, who was towed into Dunedin after breaking his mast in the Southern Ocean halfway through a circumnavigation of the earth last year. On Friday he will set out to finish what he started.

''People say you're totally crazy but there's a lot of structure. You are going to be on your own a long way from anyone so if you're not afraid there's something wrong.''

The Irishman was forced to pull out of the Vendee Globe Race after the mast on his 18.3m yacht Kilcullen Voyager was broken in a strong squall, 180 nautical miles southeast of Dunedin on New Year's Day 2017.

Mr O'Coineen has since sold his yacht and will sail a French yacht Le Souffle du Nord, which was also damaged during the same race and ended up in Bluff after hitting an unknown object in the ocean.

''I'll be representing both teams, essentially. It was easier to sell my yacht and fix this one.''

The yacht is a modern high-performance 18m Imoca 60 which is specifically designed for solo-sailing.

''Think of it as a Formula 1 car of the ocean and that's what this is. Iit's totally self-contained for solo sailing and boy can it go fast.''

He will leave the Port Chalmers Yacht Club on Friday afternoon and hoped to reach the French seaside town of Les Sables-d'Olonne by the end of March.

''I'm officially out of the race so we're going to unofficially re-enter and finish it.''

The yacht had already been put through its paces during a trip from Auckland around Cape Reinga, down the west coast of both islands and through the Foveaux Strait and into Dunedin.

''You're never really ready to go but on Friday I'll wake up and just set off. I've known since last year I needed to do this and so here I go.''

Sailing solo non-stop for two months hundreds of miles from civilisation meant you had to be prepared for anything, Mr O'Coineen said.

''I've got a pretty hefty first aid kit on here so if I need to I can stitch myself back up or pull out one my teeth. You just never know.''

During his time in New Zealand the 63-year-old had formed a relationship with the Spirit of Adventure Trust and before he left on Friday he would be joined by a group of youths who would sail with him inside the Otago Harbour.

''We'll take them out for a sail just for the experience and see what the boat is like.''

Unlike on his previous unscheduled visit, Mr O'Coineen has been able to take in some of the sights of Dunedin with two of his children, who had travelled from Ireland with him.

''Last time I was hold up and didn't get to see much of anything but this time I've got to play tourist a bit and it's a great city and I've met some great people.''

''I didn't plan to come to New Zealand, I didn't want to be here but soon was delighted to be here and New Zealand has taken me in as one of your own.''