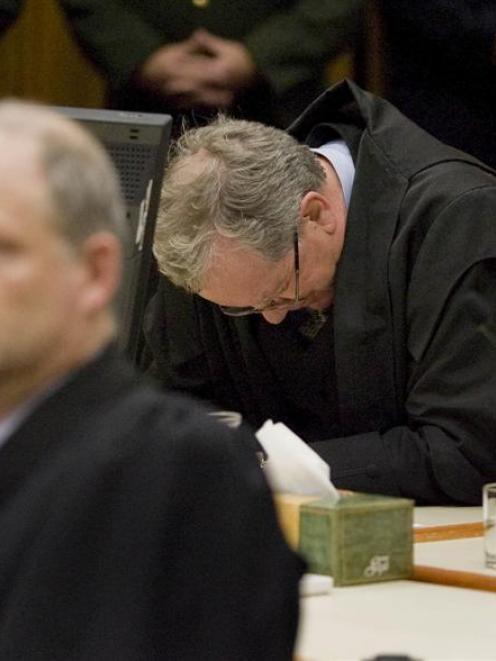 As the jurors filed in, they seemed happy.

David Bain was brought in and took his place in the dock, hands clasped in front.

He looked grim, but he had looked like that on many of the previous 57 days. It had been a grim time for all involved. A minute later, he was smiling as the words "not guilty" were pronounced.

The joyous sobbing among supporters started after the first verdict was announced. Joe Karam did not look surprised, while the police officers lined up to the right of the dock, beside David Bain, were impassive.

A supporter knocked a glass of water over Joe Karam in the excitement.

Mr Karam looked annoyed, but then held up his hands for silence - after all, there were four more verdicts to come.

For one of the few times in the past three months, he was quiet at a crucial moment.

Reporters furiously texted and tapped, too busy for much to sink in.

The Karam family sobbed and a district court judge sitting with them wiped a tear from her eye.

Upstairs, a rousing cheer erupted from the gallery and while Bain supporters applauded as the jury left the court, Mr Bain's aunts and uncles made a run for it, avoiding the reporters and television camera crews circulating in the building.

David Bain was given three cheers and then "Mr Joe" yelled to the supporters he was afraid he was going to disappoint them, but Mr Bain, who had been escorted from the room straight after the verdicts, was a bit emotional and needed five minutes.

They would have to wait, with the rest of the country, to see him outside.