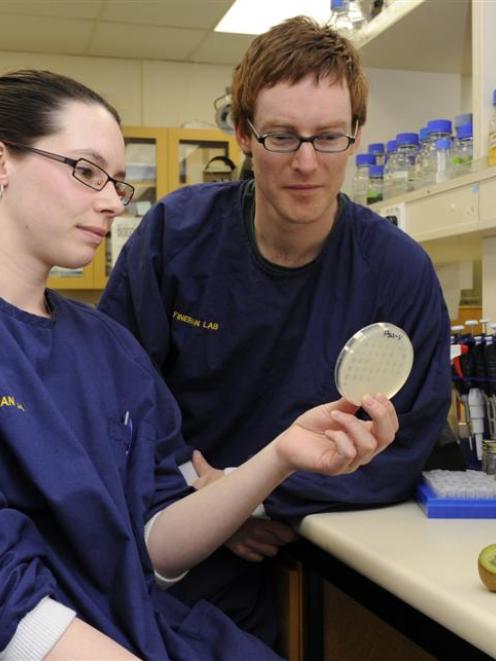 University of Otago assistant research fellow Rebekah Frampton and molecular microbiologist Dr Peter Fineran examine a Petri dish in which a kiwifruit pathogen has been killed by viruses. Photo by Gerard O'Briend.
University of Otago scientists are striving to develop a smart new way of attacking a bacterial pathogen that is damaging New Zealand kiwifruit production.

Dr Peter Fineran, an Otago senior lecturer in molecular microbiology, is collaborating with Dr Andrew Pitman, at the New Zealand Institute for Plant and Food Research, at Lincoln, in the research, which started in late July.

Most of the work on the project is being done by Rebekah Frampton, a doctoral student at Dr Fineran's laboratory, and the research is being funded as a one-year pilot study by Zespri.

Pseudomonas syringae pv.actinidiae (Psa) is the causative agent of bacterial canker in kiwifruit.

This pathogen was first identified in New Zealand last November. It can cause a systemic infection in the vines and had already had a "significant impact" on the more than $1.5 billion kiwifruit industry, Dr Fineran said in an interview.

The scientists hope to use naturally occurring viruses - known as bacteriophages - that prey on the bacterial pathogen as a form of biocontrol to limit the impact of the pathogen, which has had its greatest effect in the greater Te Puke area.

Bacteriophage can be literally translated as "bacteria eater".

He approached the industry last November when he thought some of his research interests in bacterial viruses could "possibly help tackle this problem".

The researchers had been isolating natural bacteriophages in the New Zealand environment and had discovered several of the viruses that infect Psa, of which at least five were clearly different.

These "Psa-killers" could have many uses, including being applied to diseased plants and disinfecting contaminated equipment.

The research was still in its early stages and it was hard to predict when the viruses could be available to be used.

"But we we are pushing this forward as rapidly as possible due to the urgency of the situation."

Early work had been promising and he was optimistic the bacterial viruses could prove useful in tackling the Psa problem.

This would be the first time bacteriophages had been used to control pathogenic bacteria in New Zealand.

Zespri was also working with a US company that was successfully using bacteriophages for treating a similar tomato pathogen in the United States.

It was satisfying to see a potential application of the research, given "the enormity of the problem being faced by the NZ kiwifruit industry", he said.