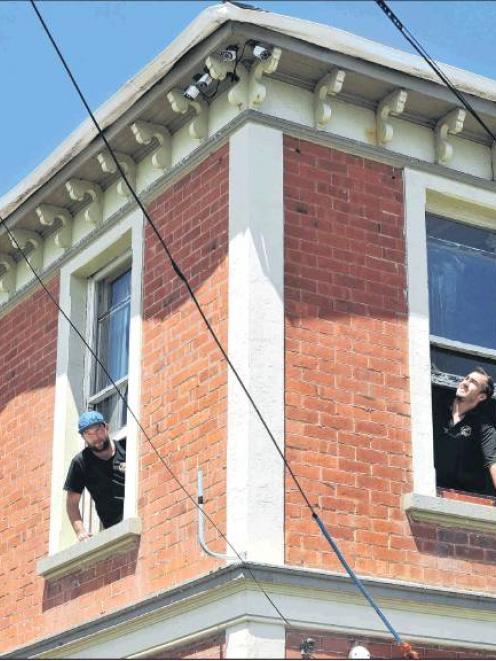 Electricians Craig Sneddon and Devon English install a camera system at 627 Castle St in January. PHOTO: CHRISTINE O’CONNOR
The University of Otago is not the only one getting into the surveillance business, as Carla Green discovers.

At least one landlord in the University of Otago student quarter has had CCTV cameras installed to monitor activity in the flats' outdoor communal areas.

The news comes as the university contemplates expanding its network of surveillance cameras to cover more of the student quarter.

Stef Wade, who manages the flats where the cameras were installed, said she and the landlords had been mulling over the decision for about a year.

‘‘It's really helpful . . . If there is a specific thing that happened, then obviously you can look up footage for that particular time and clarify what actually happened,'' she said.

‘‘It protects the tenants in those flats, because, as we all know, sometimes certain houses and tenants get blamed for things that's not necessarily their fault.''

Since the cameras were installed in January, Ms Wade said, there had been two couch fires on the property.

The CCTV footage from those incidents had been handed to campus police, she said.

Students who live at or near the Castle St camera sites yesterday were split on how they felt about the cameras. All declined to give their names.

One of the residents of the property with the cameras said the surveillance was ‘‘semicomforting''.

He was glad he would not be blamed for other people's arson or property destruction, he said.

But he also said the presence of the cameras meant he and his flatmates had been ‘‘a bit less keen'' to move into the flat. The cameras had not been installed when they signed the lease last year, but the landlord had said they probably would be.

Another resident said one of the cameras had a view of his living room.

‘‘We keep our curtain closed because of it.''

Ms Wade was concerned the tenants thought the camera was trained on their living room.

‘‘I will talk to [the tenants] about that, because there's no way anything points into the house.''

While lukewarm on the idea of the cameras, the group agreed the university's plan to install more cameras around the student quarter was ‘‘pushing it''.

‘‘[These cameras] are just for our courtyard,'' one resident said. That was different from having cameras mounted all over the neighbourhood.

University deputy proctor Andy Ferguson said in a statement: ‘‘For residents and people not doing anything unlawful or harmful to others, they have nothing to worry about. We won't be interested.

‘‘It is simply another tool, another pair of eyes, no different to when a Campus Watch staff member has seen something that shouldn't be happening on their regular walks around campus.''

There were already about 400 cameras ‘‘in and around the Otago campus'', and about 18 were ‘‘focused outwards on public streets or campus walkways''.

‘‘A number of landlords on Castle St are also installing cameras on the front of their buildings,'' he said.

‘‘This did result in the perpetrators of a recent couch fire filmed in Castle St last week to be identified as non-students who arrived in two cars to light the fires, and subsequently left in their cars as soon as the fires were lit.''

‘‘It depends on where they're directing the cameras, and to what extent it's with the consent or consultation of those who are being filmed,'' he said.

‘‘There is no doubt that there's some serious problems in Castle St and other areas are North Dunedin with antisocial behaviour and crime, so it's understandable that landlords might be taking extra initiatives to try and combat any problems.

‘‘It's probably a question of the tenants, and maybe the community, [of] how they'll react to this, and whether they will want to push back on it. And that's up to them.''

An online poll conducted by the Otago University Students' Association was split between support and condemnation of expanded surveillance.

Last night 144 people (51%) had voted against ‘‘the proposed introduction of CCTV cameras on residential streets around the Otago campus''.

OUSA president Laura Harris said she thought ‘‘the premise of implementing surveillance to monitor one specific group of residents concerning''.

‘‘I for one would not feel comfortable living on a street with surveillance,'' she said in a statement.

‘‘My foremost concern is the safely of our student members, and representing their views on this matter. Therefore, I will be actively seeking more insight into this proposal to understand the purpose and protocol for use of the cameras, and consulting with students whose communities it directly affects.''

*The date for this year's Hyde St party has been announced.

The Dunedin keg and costume party will take place on Saturday, March 19.

The Otago University Students' Association said it would meet residents on Monday to ‘‘lock in flat themes and give codes for resident and friends tickets''.