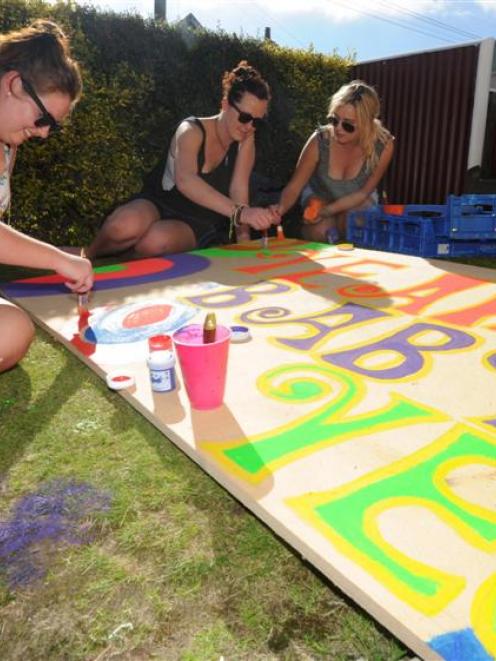 Preparing decorations for their flat, "The Shag Pad", which will be kitted out in an Austin Powers theme for the Hyde St keg party today, are Hyde St residents (from left) Rachel Harlen (20), Tare Lowe (19) and Danii Hill (20). The nature of the annual street party may be drastically altered if a permanent ban on liquor is introduced in the area later this year. Photo by Craig Baxter.
Dunedin residents have until 5pm on Monday to register their opinion on a proposed liquor ban extension into North Dunedin.

Yesterday, the Dunedin City Council had received just seven submissions on the proposal, which it has suggested as a measure to reduce excessive alcohol consumption and subsequent street disorder in the area.

The number of submissions is expected to be boosted by at least one: a petition from the Otago University Students' Association (OUSA), which has been gathering signatures opposing the liquor ban.

The nature and number of submissions may also be affected by what happens at the Hyde St keg party today. The annual party involves thousands of people drinking in the street all day.

The party has in the past dissolved into drunkenness and disorder, although a continuous police presence and the involvement of the OUSA, university and city council in recent years has seen fewer arrests and less disorder.

Committee members voted to begin public consultation on the proposal and also considered reviewing the present liquor restrictions in the central city to add a requirement for police to warn people in the first instance, unless it was impractical to do so.

In his report, Mr Mechen said Dunedin only extended its 24-hour, seven-day central-city liquor restriction into North Dunedin for events that were likely to "lead to excessive alcohol consumption and subsequent street disorder".

The OUSA's petition was signed by thousands during Orientation last month.

It suggested a ban on glass bottles in North Dunedin would be more appropriate.

But the petition had yet to be lodged with the council, Mr Mechen said yesterday.

The council was closed on Monday, but emailed submissions would still be received.

Submissions would be collated on Tuesday.